MANCHESTER UNITED returned to winning ways after second half goals from substitutes Marouane Fellaini and James Wilson earned the Reds a hard-fought victory at struggling QPR.

Van Gaal again persisted with his 3-5-2 formation, a system that makes United hesitant, unconvinving and one-paced going forward, but after a half-time tactical tweak the boss was rewarded with a vastly improved second half performance.The recalled Radamel Falcao had an early chance to put United in front but he could only fire straight at QPR stopper Rob Green after Mata had played him in.

Predictably, 13-goal Charlie Austin was Rangers' main threat in front of the watching England manager Roy Hodgson and he brought the best out of David De Gea with two well-struck volleys.

With the interval approaching, van Gaal felt the first signs of unrest from the travelling United fans with chants of "4-4-2" and "attack, attack, attack" in the face of a lacklustre, insipid first half showing.He duly acted and introduced Fellaini for Juan Mata at the break, also reverting to a more orthodox back four.

Our play immediately carried a greater threat and it took a brilliant flying save from Green to turn away Falcao's header when he seemed certain to nod home Angel Di Maria's pinpoint cross.

United were turning the screw and, just before the hour mark, finally broke the home side's stubborn resistance.Van Gaal's decision to bring on Fellaini paid dividends as Wayne Rooney's clever pass played in Antonio Valencia who in turn picked out the giant Belgian to power home his finish.

QPR's threat had diminished but a defensive mix-up (is there ever a United game without one...) between Michael Carrick and Marcos Rojo presented Eduardo Vargas with a chance to equalise but he couldn't pick out the unmarked Austin and was crowded out.
With QPR pressing for an equaliser in desperation, United made the game safe in the dying minutes.
The raw pace of young substitute striker Wilson had caused the home side's defence problems and when he had a shot on the counter-attack well saved, he followed up to slot in the rebound, make the game safe and give United a first league win of 2015.
United Faithful Man of the Match: Marouane Fellaini
Overall team performance: 7/10 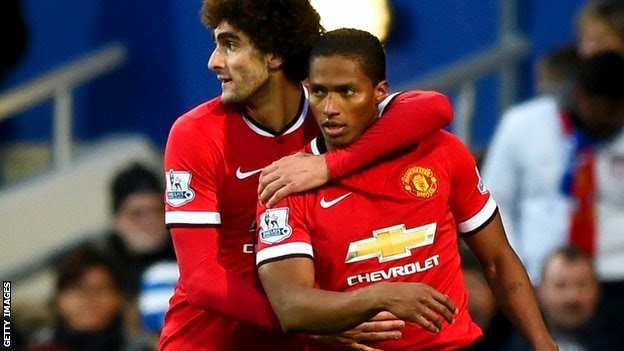 Posted by United Faithful at 13:04