Reds to face step into the unknown in the FA Cup

Manchester United will face a step into the unknown when they travel to League Two outfit Cambridge on Friday in the FA Cup fourth round.
A city famous for its university and annual Boat Race against rivals Oxford will be thrust into the footballing spotlight on Friday when Louis van Gaal's 11 time winners are in town as we bid for a place in the fifth round for the first time since SAF's retirement.
The two Uniteds have only ever met twice before, in the two legs of a League Cup second round tie in 1991/92- the year before the Red Devils ended the 26-year wait for a league title.
A strong Reds side won 3-0 in the first leg at Old Trafford through goals from current Hull City boss Steve Bruce, current United assistant Ryan Giggs and Brian McClair. The second leg was a 1-1 draw 10 days later at Abbey Stadium, with McClair again netting the goal for the visitors.

Cambridge's only goal of the tie was scored by Dion Dublin, who was promptly signed by Sir Alex Ferguson the following summer.
The hosts are managed by ex-Liverpool defender Richard Money and, in their first season back in the Football League after a nine year absence, currently sit 12th in the fourth tier.

Their home ground is the 8,000-capacity Abbey Stadium and, although United are overwhelming favourites for the game, it would be foolish to write the Us off completely.
The Reds were taken to a replay by then-Conference sides Exeter City in 2005 and Burton Albion a year later, and although United eventually came out on top on both occasions, those results proved that games such as this can be potential stumbling blocks.

The Reds knocked out League One Yeovil 2-0 to reach this stage and Money's men knocked out Fleetwood Town, Mansfield Town (at the second attempt after a replay) and Luton in the first three rounds to set up this glamour game against van Gaal's side.


Friday's fourth round encounter will be screened live on BBC One with a 1955 (why not 2000?) kick-off.
Below: Cambridge United's Abbey Stadium and the tunnel that the two Uniteds will line up in ahead of kick-off on Friday. 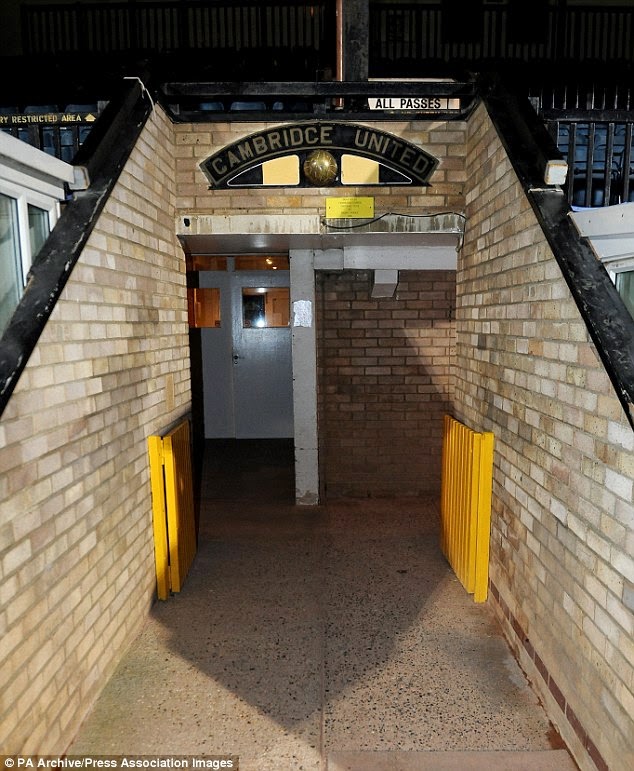 Posted by United Faithful at 03:28