United's final league match of the season descended into dramatic chaos when Old Trafford was evacuated ahead of the encounter with Bournemouth.

The scheduled 3pm kick off was delayed after a "suspicious package" was found in the North West quadrant and, shortly afterwards the match was abandoned on police advice.

The device- later found to be "incredibly lifelike" but "not viable", was the subject of a controlled explosion by a bomb disposal team.

Although an eventual hoax, safety is paramount and the swift actions of stewards, police and security personnel handled the incident with extreme efficiency and professionalism at a time when the lives of all inside looked to be in genuine danger.

The drama began around 30 minutes before the start when stewards swung into action, the Stretford End was evacuated and a "Code Red" operation was announced over the ground's public address system at 1430.

The Sir Alex Ferguson stand was also evacuated and sniffer dogs brought in.

Bournemouth's players had started their warm up but left the pitch quickly once it became clear a security operation was under way as police moved in and a helicopter circled overhead.

Those in the Sir Bobby Charlton stand, where some had already gathered in the directors box, and the East Stand, where the Bournemouth supporters were assembled, were told to stay calm and remain seated.

Fans were then advised that because of the "discovery of a suspect package in the north-west quadrant, this match has been abandoned for today on safety grounds" after a discussion between Ed Woodward, Old Trafford ground staff and Premier League chief Richard Scudamore.

Once the official announcement has been made to those still inside the ground, there was an orderly exit although roads around the stadium remained cordoned off by police and stewards as supporters were shepherded away from the area where police were carrying out an inspection of the suspect package.

United's players were seen leaving the stadium shortly after 4.30pm, with the visiting players and staff boarding their team bus around an hour later ahead of their return flight to the south coast later on Sunday.

The match is now effectively a dead rubber with United three points behind City but all but out of the race for the top four by virtue of a vastly inferior goal difference.

The fixture will now be played on Tuesday 17 May with an 8pm kick off. 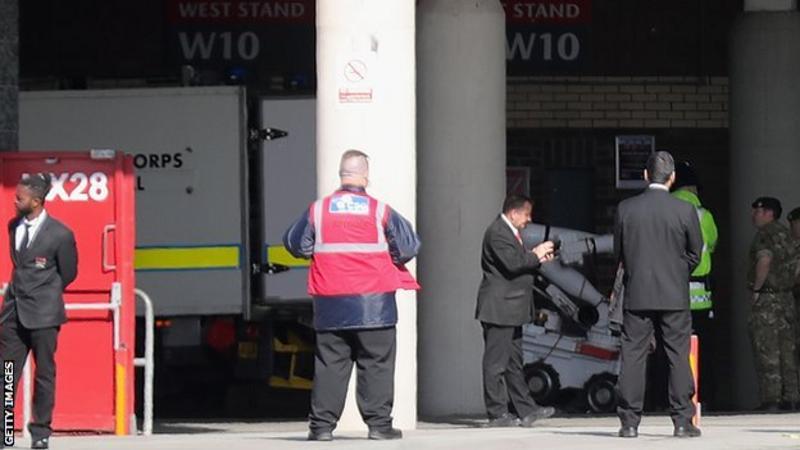