United are frustrated for long periods but Watford are profligate and pay the price as Juan Mata's exquisite late free-kick ensures the Reds capitalise on our rivals slip ups to move level on points with fourth placed City.

That makes it four wins on the bounce but momentum is checked the following weekend as Mata goes from hero to villain, receiving the first red card of his career as West Brom beat United at home for the first time in 32 years.

The Reds of Manchester and Merseyside will meet in Europe for the first time in a blockbuster, but the first leg at Anfield goes the way of Jurgen Klopp's side who take advantage of a bad night at the office for United and Van Gaal.

Sturridge and Firmino both score to put the hosts in command and break a sequence of four defeats in a row to us, and only David de Gea's heroics keep United in the tie in a desperate and lamentable showing that leaves Van Gaal denying reports over his future.

West Ham and Dimitri Payet do little to allay the ongoing uncertainty as they take the lead in the Cup quarter-final but United rally and force a replay as Martial scores late to take the tie back to Upton Park.

Liverpool arrive at Old Trafford for the second leg with the Reds looking to do the improbable and, when Martial scores from the spot with half an hour played, the comeback looks on in a first half display full of pace, energy and endeavour.

Coutinho's wonderful individual goal quickly re-establishes the two goal advantage which the visitors do not relinquish as United run out of steam to bow out of the Europa League in the last 16.

Van Gaal is a man under pressure for the umpteenth time this term but again pulls a result out the bag just when he needs it most as stuttering City are beaten on home turf.

Rashford becomes the youngest ever Manchester derby debutant and scorer as the Reds move to within one point of a City side who have just announced the arrival of Guardiola in the summer.

United counter-attack brilliantly and then defend heroically to shut out City as Van Gaal's tactical masterclass finally brings him a credit mark in a campaign of angst. 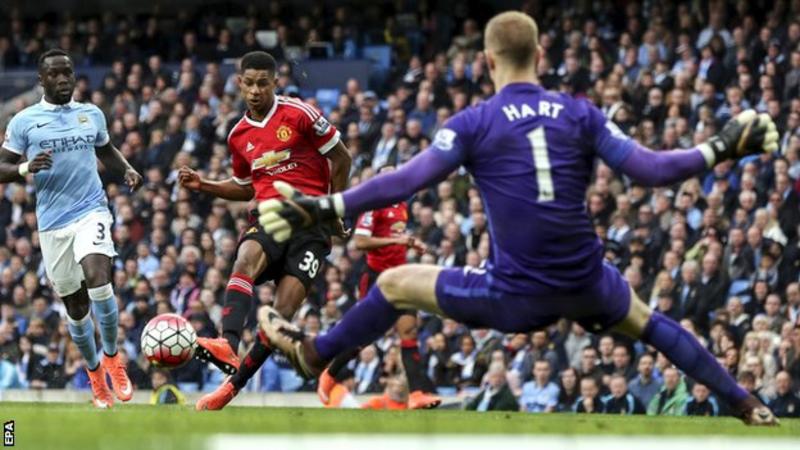