May: Reds miss out and Van Gaal sacked despite Wembley win

United start the final month of the season five points behind City who sit fourth as champions elect Leicester arrive at the Theatre of Dreams on the cusp of their coronation.

The Reds are in equally desperate need of the points, however and are in no mood to roll over, relishing their role of party poopers as Martial strikes early to put us ahead.

The Foxes show why they will be champions, however, and respond superbly through skipper Wes Morgan's header from a set piece and, although United have the better of the encounter, we cannot force victory despite Danny Drinkwater's late red card.

Leicester's title champagne remains on ice but they go on to seal the crown after Chelsea fightback to hold Tottenham and ensure they cannot catch Claudio Ranieri's side.

United, meanwhile, are locked in a straight fight with local rivals City for the fourth and final Champions League place and need a Mata winner to sink a soon-to-be-relegated Norwich side in a tight and tense encounter in East Anglia.

Pellegrini's side fail to beat Arsenal and United's top four fate is suddenly in our own hands as we head to the capital and the re-arranged last ever trip to Upton Park.

In a game that typifies our season, Sakho puts the hosts ahead early on for Martial- again- to come to United's rescue in our hour of need to turn the match- undeservedly on its balance- around.

The Frenchman's brilliance briefly illuminates a traumatic night for Van Gaal and the team (kick off is delayed by 45 minutes after an unprovoked and mindless attack on the visitors coach outside the ground).

With United 14 minutes away from a top four finish, however, we unravel and our game-management is again naive as late goals from the excellent Antonio and Winston Reid ensure West Ham sign off from their home of 112-years with a famous win.

Once again that result means that United's Champions League fate once more lie in the hands of others but no one could have predicted what would happen next.

City draw at Swansea to leave Van Gaal's side needing a 19-goal swing to overhaul them, but our final day fixture at home to Bournemouth is postponed and then abandoned after Old Trafford is evacuated with a 'suspicious' device found.

A chaotic day ends with a lot of egg on a lot of red faces and the Reds out of the top four fight but Bournemouth are eventually beaten two days later as Rooney, Rashford and Young (his first of the season) score to confirm a fifth placed finish.

A disappointing season ends with a silver lining as the ten man Reds lift a 12th FA Cup with victory over Palace in extra-time at Wembley but Van Gaal is sacked two days later and replaced by Jose Mourinho.

The club are unhappy and cite the twin failings of a negative style of play and a failure to finish in the top four as the principle reason for the Dutchman's sacking two years into a three-season contract at Old Trafford.

Martial ends top scorer with 17 goals and wins Goal of the Season for his Liverpool goal with De Gea and Smalling voted Fans Player and Players Player respectively. 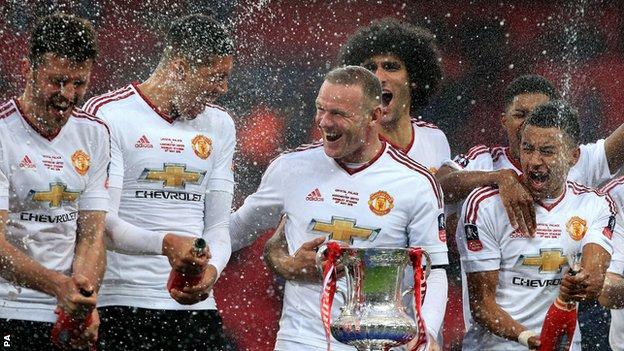