Jose Mourinho produced another tactical masterclass in the derby that was the polar opposite of the Chelsea match.

United took on the champions at their own game a few weeks ago with a ruthless showing of pace, power and penetration but we went back to "Anfield mode" against City.

We had 30% of possession, our lowest in a league game for almost 12 years, but despite their dominance the home side never really looked like scoring.
Their talented four-pronged attack of Raheem Sterling, Kevin de Bruyne, Leroy Sane and Sergio Aguero were subdued as United carried out the game plan to perfection.

The Reds showed all the qualities that we've carried with us throughout our 24 match unbeaten run - one shy of a club record - to battle to a point.

United set up with a game plan that was fraught with danger as, despite a bright start and a couple of chances for Ander Herrera and Henrikh Mkhitaryan, we dropped deeper and deeper as the match went on.

We spent much of the match on the back foot and almost the entire second half camped in our half amid wave after wave of City attacks.

This was a classic Jose away performance of organisation, discipline, work rate and a resilient rearguard action that compensated for the lack of attacking thrust.

When Jose sets up a certain way to get a result, he invariably gets it and although not pretty, it was mighty effective and this could be an invaluable result for the team.

United stay fifth, a point and a place behind their hosts but only two adrift of Liverpool, in third, with a game in hand.

Michael Carrick provided the solid platform with Eric Bailly again outstanding and City were restricted to a handful of efforts from distance.

United carried a threat on the counter through Marcus Rashford and Anthony Martial but the pair lacked service as the midfield dropped back and, by the end, were virtually non-existent.

The one negative of our night was the stupidity of Marouane Fellaini - sent off after two bookings in 19 seconds - after he clashed with Sergio Aguero.

The Argentine knew what he was doing and made a meal of the coming-together, but there can be no excuse for Fellaini's actions.

He will now be banned for three games, pending appeal, starting with the visit of Swansea on Sunday.

Paul Pogba is again a doubt for that one, and Tim Fosu-Mensah picked up a "significant" injury during his brief cameo at the Etihad. 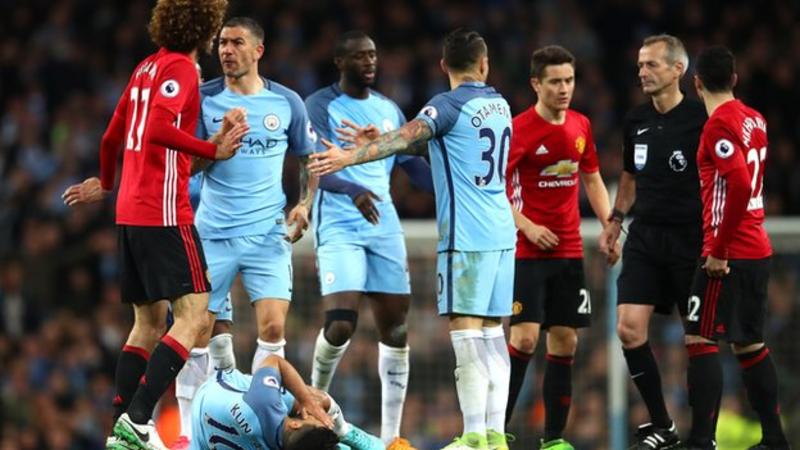 Posted by United Faithful at 08:12