Romelu Lukaku looks set to feature in the Cup final having travelled down to London with the rest of the United squad on Wednesday. Having not played since he was forced off through injury against Arsenal last month, there had been doubts over the big Belgian's fitness ahead of the clash with Chelsea at Wembley on Saturday tea-time. Jose himself admitted it was a race against time for Rom, but it's one the 27-goal top scorer appears to be winning. 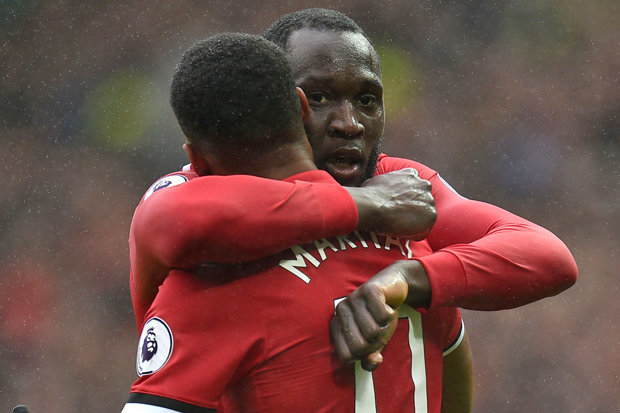 Bereft of Lukaku's pace and power, United have only scored once in three ties we've played without him,  and have struggled to make inroads in attack, so his inclusion in the squad will be a major boost. His presence on the train from Stockport to Euston siggests that he will be on the bench at the very least, with the Belgian purportedly prepared to play through the pain-barrier in pursuit of a maiden winners medal. Anthony Martial was also among the 24-man squad having been a surprise absentee against Watford in the last league tie.

Arguably Lukaku's best game in the Red of United came against our Cup final opponents, when he bullied Chelsea into submission and caused them all sorts of problems in February's tie at Old Trafford. Magnificent throughout, he scored the equaliser and set up Jesse Lingard's winner in a breathtaking MOTM performance against his old club. It was an example of what he offers when at his best, and even a half-fit Rom is better than no Rom at all. In an impressive debut campaign at United, Lukaku was within touching distance of the 30-goal landmark, three shy of it - just as Zlatan was last season - before injury cruelly curtailed him against Arsenal. The ankle injury came as a massive blow, and thoughts instantly turned to his chances of a place in the team for Chelsea and the cup final. Having travelled back to his homeland for intensive round the clock treatment, there's no doubting Lukaku's commitment to the cause. There is even a hope that he could start the final as opposed to merely a place on the bench. Mourinho will reveal all when he address the media with team news in his pre-final presser on Friday.

At his best, Lukaku resembles a bulldozer, able to cut a relentless swathe through even the most miserly and watertight of defences. His ability as a goalscorer has never been in question, having averaged 20 a season even when at some of the league's lesser lights such as West Brom and Everton. But since he's joined us, his all-round game has stepped up a notch, with his work rate, link up and ability to bring others into play as good as any in the Premier League. Third place behind only Jesse Lingard and DDG proved how important he's been to us this term - we need you out there for Saturday big Rom lad!