Michael Carrick provided the assist on his final United appearance as a solitary Marcus Rashford goal cemented second place and saw us reach 81 points in the table.

Carrick - who captained the team on his 464th and farewell game - pinged a pinpoint pass into Juan Mata to square for Rashford on 34 minutes as the Reds ended the Premier League season with our highest points tally since we last won it in 2013. Carrick received a guard of honour from both sides and was taken off to a lasting and rapturous ovation five minutes from time before a post-match speech in which he spoke of the challenges ahead as a member of Jose's coaching staff.

Due to the 'dead rubber' status of the tie with next weekend's FA Cup final the priority and Watford already safe from relegation, it was a lethargic and low-key start with clear - cut chances at a premium. Then, in the 33rd minutes, Carras fittingly rolled back the years and put his own personal stamp on his final game with a glorious pass to start the move for the only goal. Deep in his own half, he guided a measured ball forward to pick out Mata, who had ghosted in beyond the Hornets backline.
Mata brilliantly controlled the ball and slid across goal for the onrushing Rashford, who side-footed home beyond Heurelho Gomes from close range.

Sergio Romero came into the side for the rested David de Gea, and the rested Spaniard would have been proud of his deputy's intervention shortly before the interval. He tipped Richarlison's point blank range header around the post, and then saved well to deny Gerard Deulofeu's follow-up effort from the resultant corner.
The second half resembled little more than an end-of-season stroll in the sun, as Old Trafford rose as one to offer support to Sir Alex Ferguson as he continues recovery from a brain haemorrhage. 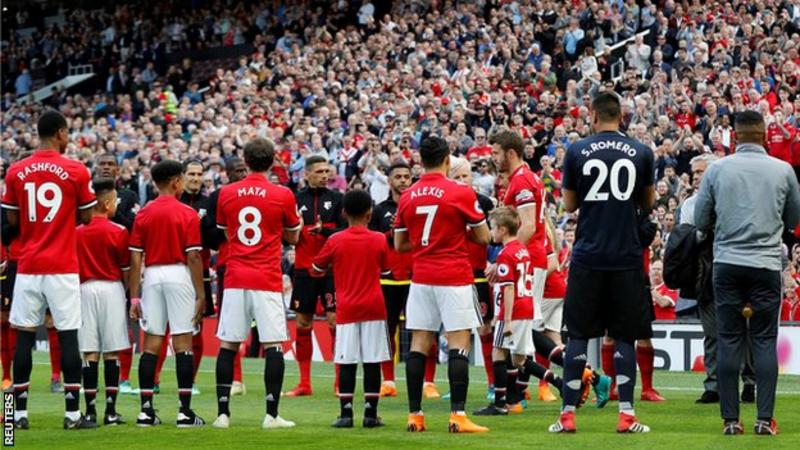 Mourinho threw a curve ball when Ander Herrera was introduced in place of Daley Blind, for whom this could also prove to be his final tie in the red of United. Scott McTominay flashed a shot wide from distance, before acclaim for the departing Carrick arrived in the 84th minute. A player who will forever be remembered as a legend and one of the greatest players in the history of this club left the stage for the final time to a standing ovation with arms aloft as he kissed the badge with a bear hug from his manager, Paul Pogba on in his place. All of it was fitting recognition for a magnificent and multi-medal winning United unsung hero.

There was no further action as the curtain came down on a league season which, although it did not yield the much longed-for title, saw United left in the shade only by the breathtaking brilliance of Pep Guardiola's record-smashing centurions.

Our campaign is not over yet, as attentions turn to the FA Cup final at Wembley against Chelsea next Saturday as United bid for a fourth major trophy in three seasons.