United prevailed after a marathon shootout of 26 penalties to win our ICC opener after a much improved performance against Gennaro Gattuso's Rossoneri in Carson, California. United looked fitter, sharper and more fluid than they had in their first two ties against Club America and MLS side San Jose last time out, as Alexis Sanchez stood out with an impressive individual showing. 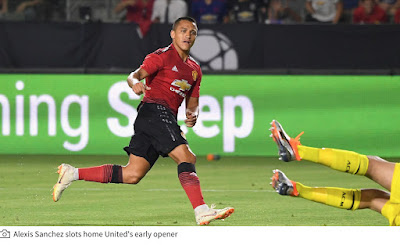 The Reds, who lined up in a lesser spotted 3-5-2 formation, made a bright start to the match and moved ahead inside 12 minutes through the Chilean. Sanchez, superb all evening, had already had an effort saved by Gigi Donnarumma but the young keeper was powerless to prevent Sanchez from opening the scoring. Juan Mata's pinpoint volleyed pass picked out Alexis and he finished well from close range.
Our lead lasted only three minutes though, as a long ball from Leonardo Bonucci found ex Liverpool  man Suso in space and he fired in a finish beyond the advancing Lee Grant.
Sanchez went close once more from a corner and the impressive Andreas Pereira - who has really made a name for himself during pre-season - flashed a shot wide. The Reds looked dangerous with every attack and a blistering break - started by Scott McTominay's and also involving Alexis - culminated with Ander Herrera's effort from distance which was tipped behind by the diving Donnarumma. The keeper was being kept busy by United's potency, as he was called into action again to deny Juan Mata before he smothered McTominay's looping header on goal.

At the other end, Davide Calabria fired straight at Lee Grant and Eric Bailly blocked bravely from Franck Kessie in the final action of an action-packed first half.
McTominay then forced Donnarumma into another save and his replacement - ex Liverpool stopper Pepe Reina - was called upon straight away when he denied Luke Shaw and then Mata twice in quick succession. Fabio Borini struck a post, Pereira went close again and Suso headed off target in a frantic finale to proceedings.
Penalties were needed to decide the content, and a seemingly low-key shootout instead turned into an epic, sudden death, topsy turvy tale. After both sides traded successful spot kicks - Pereira, Alexis, Ander Herrera, Chris Smalling, Axel Tuanzebe, Matteo Darmian and substitute Timothy Fosu - Mensah all scored for us, as Reina and Joel Pereira made three saves apiece. After Pereira's second put United 8-7 up, Calhanoglu levelled and Herrera scored for the second time. That paved the way for Franck Kessie, who blasted over the bar with the 26th spot kick of the shootout, to bring a marathon and exhausting contest to an end.