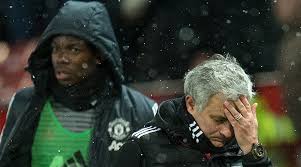 At the end of a turbulent week that only further added to the club and Jose Mourinho's woes, United make the trip to east London to meet a familiar foe and a lowly but improving West Ham side.

Coming hot on the heels of the Carabao Cup KO to Frank Lampard's Derby, and with Mourinho locked in an egotistical battle with star man Paul Pogba, United's season has quickly unravelled.
Despite being stripped of the vice captaincy, Pogba will start at the London Stadium with Marcus Rashford also available again after suspension. Sergio Romero is suspended so Lee Grant, fresh from his unexpected competitive United debut, will take the Argentinian's place on the bench as cover for David de Gea. Marcos Rojo is the Reds only injury-enforced absentee with the Reds likely to make wholesale changes from Tuesday night.
With Rashford returning from his suspension, Mourinho has a chance to throw a surprise in the works. He could join Romelu Lukaku up top by replacing the struggling Alexis Sanchez, who has now gone 831 minutes without scoring a Premier League goal, and Anthony Martial - the only player to emerge from the Derby debacle with any credit - could also be in contention.

After three successive away wins at Burnley, Watford and Young Boys, the Reds face arguably their toughest test on the road so far in the shape of former City manager Manuel Pellegrini's West Ham side. The Hammers spent big and spent well following his appointment, with Jack Wilshere, Felipe Anderson, Andriy Yarmolenko and Lukasz Fabianski among the new faces added to a new look squad. It was a tough start for the east End side, as despite the vast influx of talent, four successive defeats left them bottom of the table and asked early questions of the Chilean. There are signs that they are on an upward trajectory now though, having won at Everton and held in-form Chelsea to a draw before their biggest win in 35 years in midweek - an 8-0 Carabao Cup tonking of League Two basement boys Macclesfield Town.
Talismanic figurehead Marko Arnautovic missed that match, but the tricky Austrian could return from his knee injury in time for the visit of Mourinho's United. Carles Sanchez also picked up a knock against Macclesfield, and he faces a late fitness test.

Despite the fact Pogba will face the Hammers, Mourinho warned the World Cup winner that no one is bigger than our club, and said: "
"Tomorrow he plays. He is a player like the others, no player is bigger than the club. If I am happy with his work he plays, if I am not he doesn't play. I am really happy with his work this week. He trained really well. The team needs good players. He is a good player,
"The training session was open; you had some cameras with some potential to get some of the words. Maybe you have to change that potential if you want to know everything that is said, because I am not going to comment.
"Nobody trained better than Paul on Tuesday, Wednesday, Thursday and Friday – nobody trained better than him. Tomorrow he plays, so end of the story."

Posted by United Faithful at 11:56