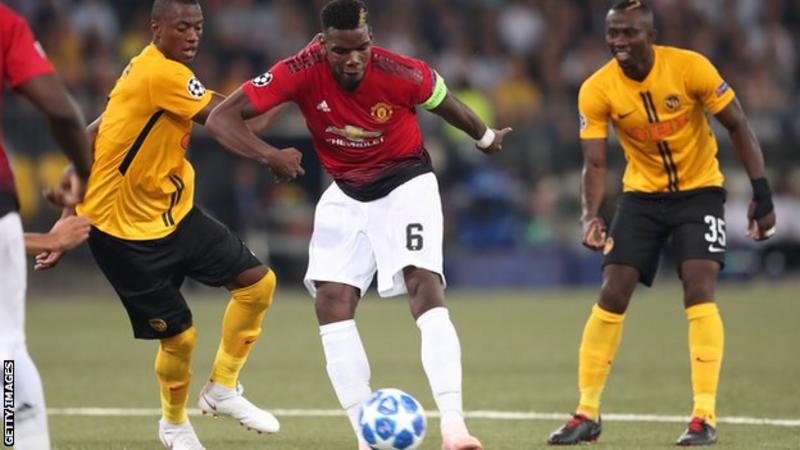 Captain Paul Pogba scored twice - including a goal of the season contender - as United knocked aside Young Boys to take early command of Group H in the Champions League.

Pogba curled home an exquisite finish after a brilliant one-two with Fred to put the Reds ahead ten minutes before the break before he added a penalty and Anthony Martial a third after the break as we penetrated Young Boys with regularity.
Portuguese full-back Diogo Dalot was handed an official debut by his compatriot manager, and the right-back played well, bombing up the flank on the overlap as well as his defensive positioning and nous as United came under early pressure.
Until Pogba's intervention, the hosts had enjoyed the better of proceedings as Jose Mourinho's United struggled for fluency on the Swiss champions plastic pitch.
Winning away from home in Europe is never an easy task no matter who you are, and, buoyed by a bouncing, fervent mass of yellow that greeted them at the Wankdorf Stadium, Young Boys started brightly on their group stage debut and certainly did not seem overawed by the occasion. Former PSG forward Guillaume Hoarau headed wide early on, and David de Gea was called into action twice in quick succession as he denied first Mohamed Ali Camara and then Christian Fassnach.

Marcus Rashford clipped a post and then went close again as he cut in and flashed a effort wide beyond the right hand post of the wonderfully named keeper David von Balmoos. Skipper for the night Pogba then took centre stage. Linking with Brazilian Fred, Pogba was inventive and precise for the opener as he opened his body up and curled home a sumptuously dipping finish from 20 yards. The World Cup winner then doubled his tally with his third successful spot-kick of the season after defender Kevin Mbabu was harshly adjudged to have handled Luke Shaw's cross.

United, in the lead and smelling an important victory, began the second half comfortably and attempted to keep possession for long periods, presumably in a bid to keep Young Boys at bay, the hosts who had won six consecutive matches in all competitions prior to this European contest.

With 25 minutes to play, United rubber stamped the result through Martial with another lovely goal that began and culminated down the left, as Shaw and Fred linked up to play in the wantaway forward who fired in a well-taken finish.

That added gloss to a result now beyond any lingering doubt, but the Reds continued to press as substitute Juan Mata drilled an effort wide in what proved to be the last attack of an professional, clinical and well earned European away win as United brushed off Young Boys to leave them hammered and on their knees on their own turf. Elsewhere, section favourites Juventus powered to a 2-0 win in Valencia through two Miralem Pjanic penalties, but the win came at a cost with Cristiano Ronaldo potentially ruled out of Juve's trip to Old Trafford on Matchday 3.