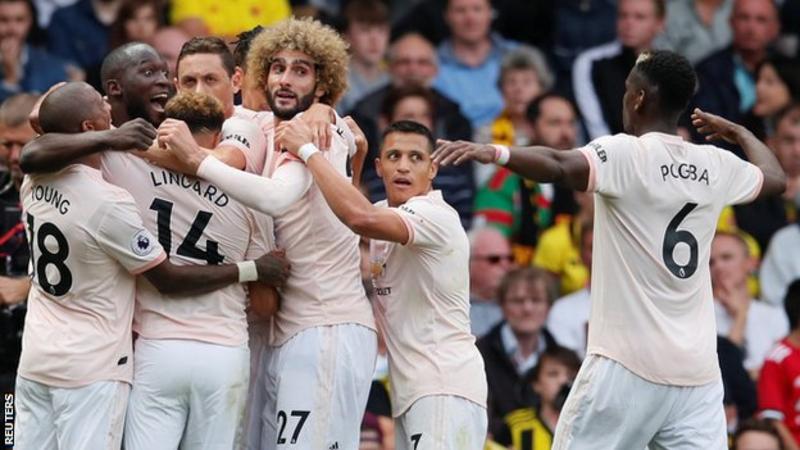 United inflicted Javi Gracia's previously unbeaten Watford to a first defeat of the season and picked up back-to-back away wins in the process. The Reds were dominant before the break and raced into a two-goal advantage thanks to two goals in three minutes from Romelu Lukaku and Chris Smalling.
But Watford showed their credentials and hit back after the interval, as Jose Mourinho's men were forced to withstand a fightback. Andre Gray pulled a goal back with United indebted to David de Gea as Nemanja Matic was sent off late on.

De Gea had come under scrutiny since the World Cup and has looked a shadow of his former self so far this term, but the Spaniard was back to his best here and was called into action early on. Hornets captain Troy Deeney almost provided an unwelcome sting in the tail from distance on 11 minutes, only for him to be denied by a superb low save from the sprawling De Gea.
Lukaku's fourth league goal of the season came in the 35th minute in slightly bizarre fashion when the returning Ashley Young's cross looped off the lower chest of the burly Belgian and in over former United keeper Ben Foster. Three minutes later, and the Reds were 2-0 ahead with a finish that couldn't be in starker contrast. Smalling showed the composure and technique of a seasoned striker to pull down Marouane Fellaini's flick on, pivot and thump home a volley into the roof of the net from close range.

Paul Pogba played with purpose and confidence, and twice tested Foster from distance in the first half, only to be brilliantly denied on both occasions as the busy Watford keeper tipped wide.
Alexis Sanchez also impressed and did have the ball in the net soon afterwards, only for his offside effort to be correctly chalked out by the linesman.
Watford have been the Premier League's surprise package and came on strong after half-time as they grew into the tie and made United work for the win.
Abdoulaye Doucoure fired narrowly wide, De Gea saved well from the same player and Will Hughes also went close with a header. It was the impressive Doucoure whom created Watford's goal as they breathed new life into the contest with 25 minutes to play. After a slick, well-worked move, his run and cross picked out the onrushing Gray who applied an emphatic finish for his second goal of the season.

United found themselves under siege in the closing stages but, after another wonderful save from a full stretch De Gea - this time from Christian Kabasele - we had two late chances in quick succession to put the tie beyond any lingering doubt. With Watford pressing for an equaliser, Sanchez was snuffed out by Craig Cathcart and a last ditch lunge from Kabasele thwarted substitute Anthony Martial.


Matic was sent off for a second bookable offence deep into stoppage time but it came too late to matter as United earned a hard fought victory to move level on points with the chasing pack.