Manuel Pellegrini's improving Hammers inflicted a third league defeat of the season on a listless and outclassed United side to pile more misery on beleaguered boss Jose Mourinho. 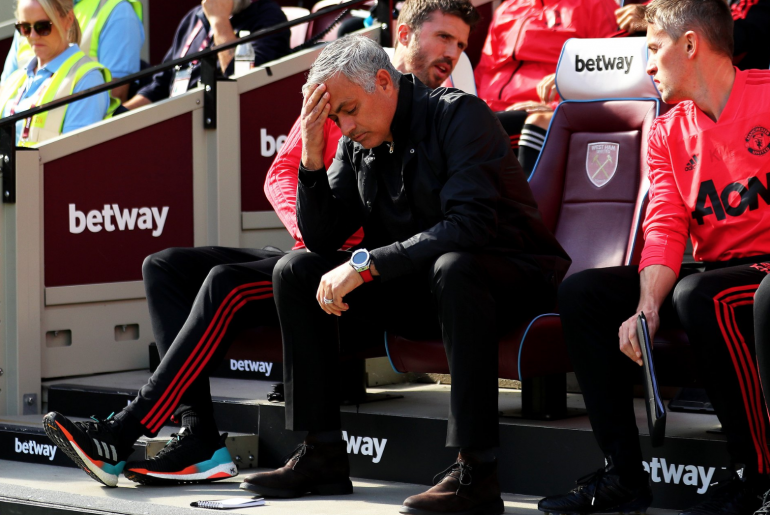 After the Carabao Cup KO at the hands of Frank Lampard's Derby, we were at least expecting a strong reaction from the Reds, but in truth so fragile and bereft of even the basics is this Reds side that - from the moment Felipe Anderson hit his first West Ham goal in the fifth minute to get his side off and running - the result never looked in doubt.
This is United's worst league start in 29 years with a paltry tally of ten points from seven games,  the same as we managed during the David Moyes season in 2013-14, only this time offset by a negative goal difference of -2. This was just as bad - if not even worse - as anything we saw under the Scot. For some reason only he knows, Scott McTominay came in for his first start of the season as part of a back three, with an actual central defender, Eric Bailly left on the bench with Alexis Sanchez and Jesse Lingard left out completely.

The Hammers - with only one win in 19 league games coming into this one - sensed that United were there for the taking and were ahead inside five minutes through club record signing Anderson, whom cleverly back-heeled home from Pablo Zabaleta's cross despite both players appearing to be offside.

Romelu Lukaku headed off an upright but the hosts moved 2-0 in front just shy of the interval in fortuitous fashion through another new signing, Andriy Yarmolenko, as the Ukranian's shot cannoned off the backpedalling Victor Lindelof and looped in over the stranded David de Gea.

Arnautovic - a constant menace throughout - almost put the result beyond doubt when he flashed over the bar on the counter attack, but Mourinho soon turned to Marcus Rashford and the young striker was sent on in an ultimately futile attempt to swing the tie back in United's favour.
Lukasz Fabianski saved superbly from a trademark Marouane Fellaini header, and Anderson went close at the other end after another rapid West Ham counter attack.
Rashford restored a glimmer of hope for the Reds when he halved the deficit with an acrobatic backheeled finish from a Luke Shaw corner, on 71 minutes, to seemingly set up a frantic finale.

Just when it looked as though United had finally found a foothold,  game management went out the window and Arnautovic capped his superb individual performance with a deserved goal. Mark Noble's beautifully weighted slide rule pass carved United's unconvincing and flat footed defence wide open, and Arnautovic raced through to put the ball beyond the advancing De Gea from close range.

Overall team performance: 2/10
United Faithful Man of the Match: Marcus Rashford. Came on as a sub but the only player whom looked like he cared.