United got our Champions League campaign off to a winning start with a 3-0 win over Swiss champions Young Boys, but the headlines were grabbed - almost inevitably - by a certain Cristiano Ronaldo in the other match in Group H.

The former United and Real Madrid forward was sent off, albeit somewhat harshly, for allegedly pulling the hair of Valencia defender Jeison Murillo in an off the ball clash shortly before half-time at the Mestalla. Despite their numerical disadvantage Juventus still went on to win 2-0 without him, the seven-time defending Italian champions will have to make do without their star man - the record Champions League goalscorer -  for at least the next three European ties. Ronaldo signed for Massimiliano Allegri's domestic kings for £99m in the summer in a bid to help Juve land that elusive European crown.

Ronnie will definitely miss their next Champions League group stage game against Young Boys on 2 October - but a two-game ban would rule him out of the trip to his former side Manchester United for Matchday 3 on 23 October at Old Trafford.
And if he were to be handed a three-match suspension, he would also miss Juve's home game against United on 7 November in the reverse fixture, therefore denying him the emotional reunion with not only United, but also his former Real Madrid boss Jose Mourinho - an occasion that had set pulses racing and grabbed all the headlines from the moment the draw was made.
Uefa could possibly decide to increase the ban because of the time it took Ronaldo, who was in tears, to leave the pitch. A one-game ban is automatic - with no right of appeal - but given the very harsh nature of the sending off - it wouldn't be a surprise if Juventus appealed the decision in a bid to limit Ronaldo to only the minimum one match suspension. 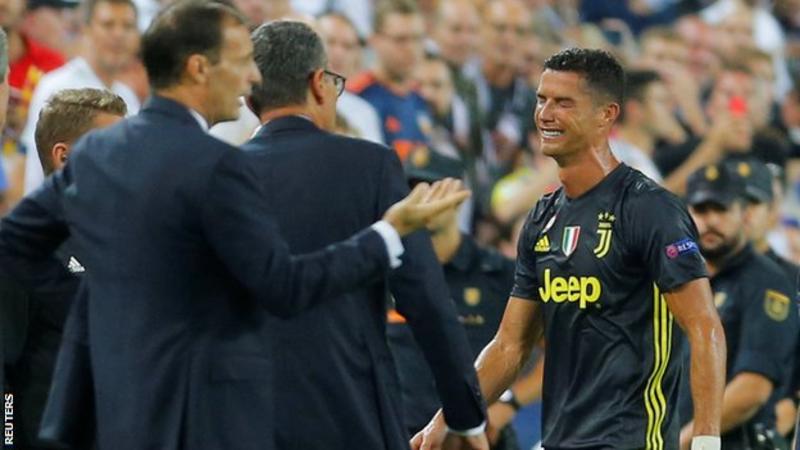 The UEFA regulations state: "As a rule, a player who is sent off the field of play is suspended for the next match in a UEFA club competition (i.e. UEFA Champions League, UEFA Europa League or UEFA Super Cup). In case of serious offences, the UEFA Control, Ethics and Disciplinary Body is entitled to augment this punishment, including by extending it to other competitions."

Ronaldo has won the tournament five times - more than anyone else except Paco Gento (six) and this was his first red card after 154 appearances in the competition.