A feeble and febrile Man Utd side wilted in the face of Jurgen Klopp's full throttle Liverpool who returned to the top of the table through two deflected Xherdan Shaqiri goals. 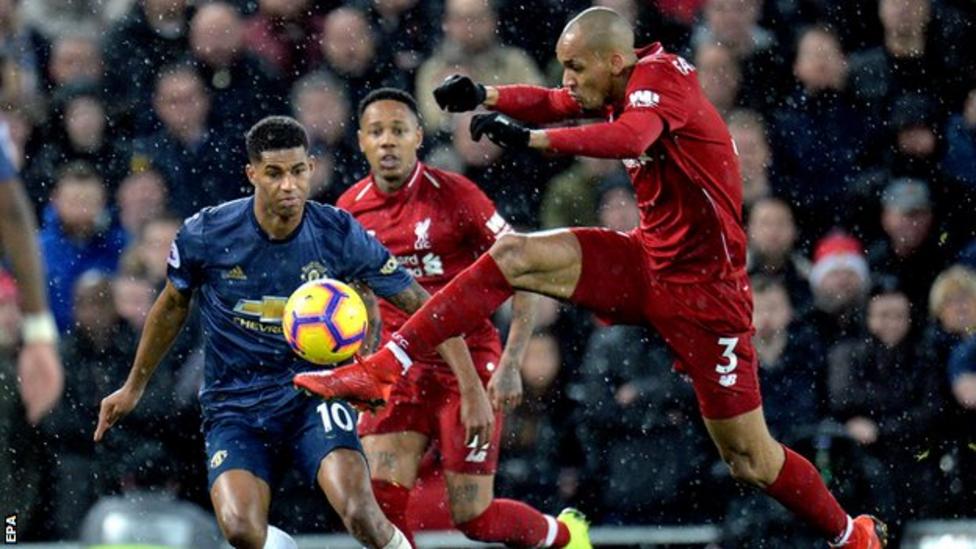 It was the German's first win over Jose Mourinho since the two men arrived in the Premier League, and the result never looked in doubt from the moment Sadio Mane hooked his side in front on 24 minutes.
United were gifted an equaliser when Alisson's fumble allowed Jesse Lingard to nip in and score, but we rarely threatened and Swiss substitute Shaqiri scored twice after half-time. The men from Merseyside pilfered 36 shots to our six and, in truth, 3-1 flattered a pathetic, woeful  and desperately ordinary Man Utd side. There was an element of fortune about both of Shaqiri's strikes, but there can be no argument that Liverpool fully deserved their victory.

It saw the Anfield side return to the top of the table after Pep Guardiola's City had replaced them there with victory over Everton in Saturday's early game.
The stark reality of the situation is that. whilst both of our two biggest rivals are flying and set to fight tooth and nail for the title, United are sixth - 19 points behind Liverpool, eleven points off fourth and on a negative goal difference after our worst ever start to a Premier League season. It is December.

As is their raison d'etre, Liverpool started the 201st competitive contest between the two at breakneck speed, with the Reds - in their dark blue away strip - forced to defend a flurry of early corners.
Fabinho flashed a shot wide and David de Gea saved a rising Roberto Firmino drive from distance before the hosts took the lead their dominance merited. Fabinho has made a slow start to life in England but had his best game in a Liverpool shirt so far, and it was from the Brazilian's perfectly weighted delivery that the unmarked Mane hooked home under De Gea.
United offered virtually nothing as an attacking threat but yet, nine minutes later, improbably drew level when Romelu Lukaku's hopeful cross was parried by Alisson into the path of the onrushing Lingard who finished well to hand us an unlikely equaliser.

Firmino headed wide, De Gea saved well from Mane and Giorginio Wijnaldum also went close but United survived until half-time, which saw the introduction of Marouane Fellaini in place of Diogo Dalot.
Whilst Mourinho predictably turned to the Belgian as his first trump card, Klopp only further illustrated the depth and quality at his disposal by putting on the diminutive Swiss at a time when United were frustrating a Liverpool team that remained in the ascendancy throughout.

It was he whom made the decisive difference albeit in fortuitous circumstances. He had been on the field for less than five minutes when he collected the ball from Firmino and fired towards goal. De Gea would have saved easily if not for a hefty deflection off Ashley Young that wrong-footed the keeper and flew in.

Mohamed Salah headed wide, Firmino was denied by De Gea but Shaqiri put the game beyond doubt with another deflected strike, this time off Eric Bailly, to seal victory. Anthony Martial and Juan Mata were belatedly introduced off the bench but both arrived too late to salvage an unlikely point.