United twice came from behind but had to settle for a point despite a much improved performance against Unai Emery's high flying Arsenal.
A rare David de Gea clanger gifted the Gunners an unlikely lead, only for Anthony Martial to bring the Reds level by half-time. Substitute Alexandre Lacazette restored his side's narrow advantage only for Jesse Lingard to equalise again 13 seconds later. A draw was ultimately a fair result from a thrilling, slipshod encounter in which both sides defensive capabilities came into question.

Arsenal hadn't won at Old Trafford for 12 years but with this United side at their lowest ebb for years, you felt they would never have a better chance to do so this time.
The Reds uncharacteristically started brightly without really troubling Bernd Leno in the Arsenal goal. But early momentum gave way to a numbing familiarity as the away side drew first blood just shy of the half hour mark.
Shkodran Mustafi almost stumbled into a corner but his header was fumbled by De Gea, who should have easily held on. 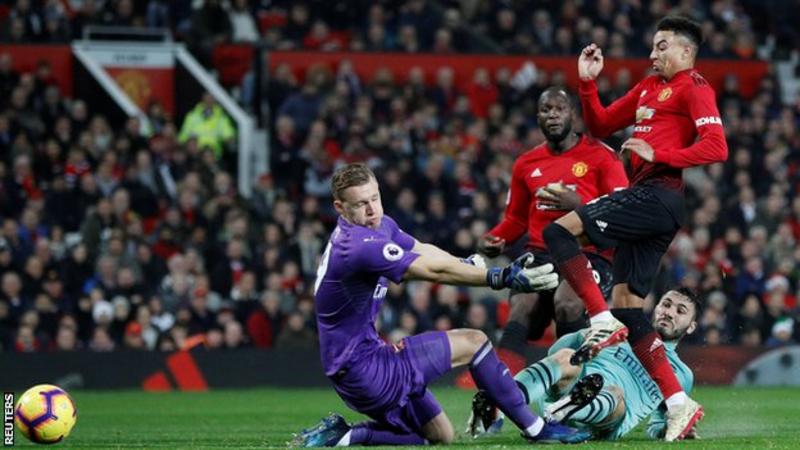 The Spanish goalkeeper spun around in horror at his error to see his compatriot Ander Herrera lash the ball away off the line. For a moment, it seemed United had escaped but referee Andre Marriner received a quick update from goal-line technology and confirmed the Gunners were 1-0 up.

The Reds refused to buckle and within five minutes had restored parity through Martial,  who marked his 23rd birthday with a well-take goal from close range as he swept home Herrera's cut back after a Marcos Rojo free-kick.
This was high octane, robust stuff reminiscent of some of the classic fiery blockbusters we witnessed when these two were at the peak of their considerable powers.
Arsenal lost Rob Holding and Aaron Ramsey through injury before Martial unfortunately followed when he limped off to be replaced by Romelu Lukaku on 63 minutes.
Then came a tactical switch by Emery as Lacazette replaced Iwobi in a move that immediately reaped dividends.

The French forward had only been on for a matter of moments before he restored Arsenal's lead. The returning Marcos Rojo - who was otherwise impressive - lost the ball on halfway. The Gunners sprung forward on the counter as Lacazette played a one-two with fellow sub and former United man Henrikh Mkhitaryan.
Rojo and Eric Bailly attempted to thwart the striker's run but despite the Argentine's best efforts the ball struck Lacazette, hit Rojo and richocheted in.
Once again, the Reds response was rapid. Arsenal's celebrations had barely died down as long ball found Lingard and he applied a nice finish beyond Leno from close range.

De Gea twice atoned for his first half error to keep out the league's top scorer Pierre - Emerick Aubameyang.
Marcus Rashford flashed a shot wide and Lacazette correctly had a goal ruled out as he kicked the ball out of De Gea's hands.

De Gea was back in the action as Arsenal turned up the late heat with Mkhitaryan having a 'goal' ruled out for offside and almost setting up a winner for Aubameyang when the striker’s powerful shot was brilliantly saved by the Spaniard.


It was a compelling, value for money finale as both sides had to settle for a draw.