The rejuvenated Reds continued their renaissance as Ole Gunnar Solskjaer maintaned his 100% record as interim manager with an impressive win over out-of-form Bournemouth.
Paul Pogba laid the spectre of his troubles with Jose Mourinho to rest as he scored his second successive double, added to Marcus Rashford's early opener and substitute Romelu Lukaku's late fourth. United's third consecutive win in our last game of 2018 was only marred by the returning Eric Bailly's errant sending off for a reckless lunge on Cherries substitute Ryan Fraser.

The Reds remain sixth but are now only three points behind place-above Arsenal in the congested battle for the fourth and final Champions League place. It's been a fruitful festive period for the team, with twelve goals in three games and three wins on the bounce for the first time since April. Meanwhile, Eddie Howe's injury-hit side have lost eight of their last ten matches in all competitions.

United were on the front-foot from the off and threatened to unpick the Cherries from the very first attack of the tie. In stark contrast to the team's constant late flurries under Jose Mourinho, it took only five minutes for this unrecognisable United side to move in front.
Pogba scored it, but he was heavily indebted to the pace and skill of Marcus Rashford. His lightning footwork bamboozled both Nathan Ake and Diego Rico right under the noses of the Stretford End and Rashford’s cross was seized upon by Pogba as he sprinted in to slide home the first opener from close range.

David de Gea saved superbly from the dangerous Ake but United were relentless going forward and were rewarded again in the 33rd minute when Pogba stretched the lead as he scored his second of the match. The recalled Ander Herrera provided the assist as his floated cross was met with the  Frenchman's powerful header from six yards.

Rashford had been a thorn in Bournemouth’s side with his pace, constantly unsettling Howe’s back line. He got himself onto the scoresheet in the 45th minute. The striker lunged and stretched onto a cute cross delivered by the outside of Martial's right boot and connected at the far post to make it 3-0.

United were left still searching for the first clean sheet of Solskjaer's temporary tenure when the visitors pulled a goal back right on half-time through Ake, who headed in.
Pogba was a man reborn and was again involved as the Reds stormed forward once more on 65 minutes. Nemanja Matic - another playing feeling the full force of the Solskjaer effect - pinged a pass into the Frenchman who in turn flicked on for the onrushing Rashford. He attempted to round the advancing keeper, but Asmir Begovic did well as he saved superbly at the feet of the terrific forward. 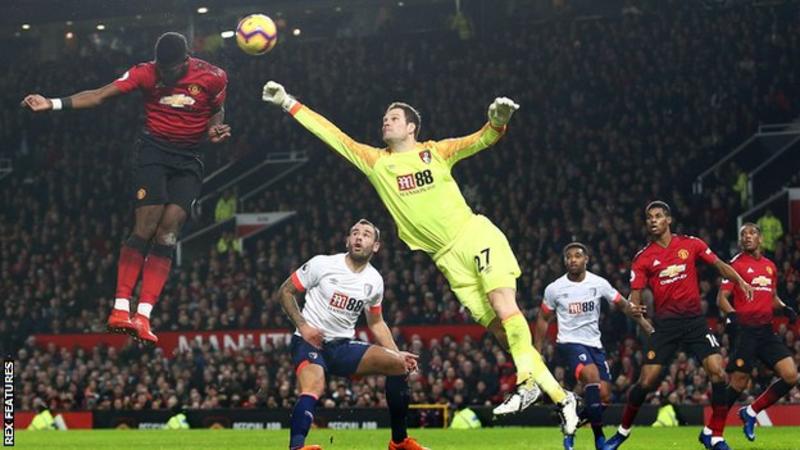 Rashford was replaced by Lukaku soon afterwards, and the substitution reaped dividends for Ole as Pogba lifted the ball into the path of the burly Belgian and he did the rest from ten yards.
The Reds were rampant and ruthless and almost scored again as Pogba came within inches of his hat-trick when he rattled a shot against a post with 12 minutes to play.

United were coasting and it was all going smoothly until Bailly was sent off in the 79th minute as the Ivorian launched a scything straight-red tackle on sub Fraser.
Solskjaer had been preparing to bring on Marouane Fellaini at that point with the Belgian midfielder stripped and ready on the touchline to come on.
However, Bailly’s exit changed the substitution and Phil Jones instead replaced Martial.
Even when reduced to ten men, United still eased through the rest of the game to the final whistle to keep the feelgood factor going.