United hit four for the first time this season to sweep aside rock bottom Fulham and move into the Premier League's top six.
Claudio Ranieri's lowly but improving Cottagers had picked up four points from three games but never looked likely to get anything from their trip to Old Trafford. From the moment Ashley Young put Jose Mourinho's United ahead early on, the result was never in doubt.

It came after 13 minutes when the winger-turned-full-back - on his return after a one match suspension - ran through and fizzed home an effort into the corner.
Marcus Rashford teed up Juan Mata for 2-0 and Romelu Lukaku finished from close range after the ever-impressive Mata had picked him out.
Substitute Aboubakar Kamara pulled one back from the penalty spot, but Andre - Frank Zambo Anguissa was then sent off for a second booking.
Rashford capped his eye-catching individual performance with a deserved goal as the ten men of struggling Fulham were well beaten in style.
United finally enjoyed themselves and belatedly put on a goal fest for a patient and long suffering Old Trafford crowd. The Cottagers had gone 19 matches without keeping a clean sheet but United had only scored once in the opening 15 minutes of games all season. So the hosts' start against the beleaguered capital club was exactly what was called for. It was decisive and ruthless.


With United’s first attack of the match, captain Young opened the scoring. He took on his marker Denis Odoi and, with a mix of footwork and muscle, forced his way in before curling a right-foot shot into the far top corner. It was his first goal of the season and it set the tone for pretty much one-way traffic in the opening 45 minutes. 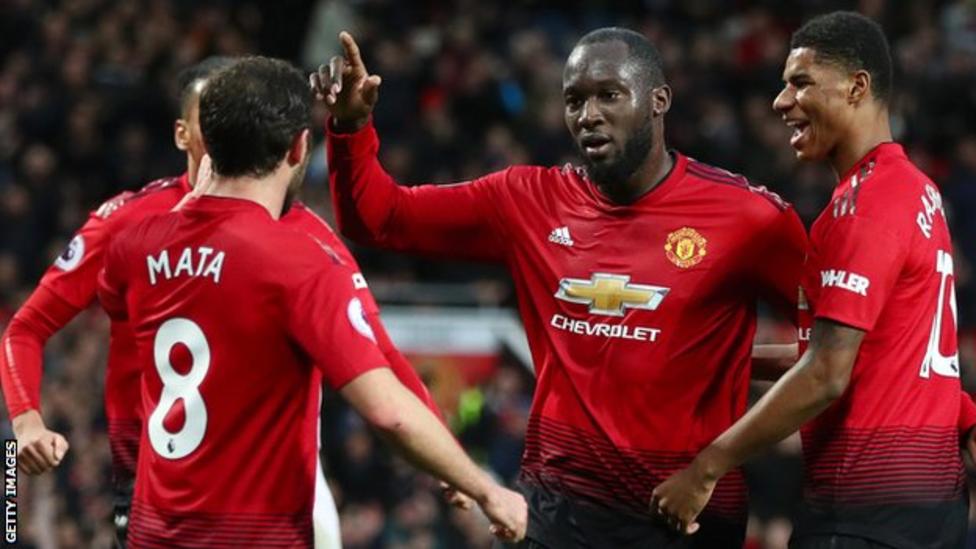 After promotion to the Premier League last term, Fulham have had a torrid time on their return to the top level, forcing them to dispense with Slavisa Jokanovic and bring in Ranieri four games ago.
The Reds moved 2-0 ahead on the half hour mark through Mata's fourth of the season. Lukaku fed Rashford and the Mancunian in turn cut the ball back for the onrushing Spaniard who applied the finish from ten yards.
Sergio Rico saved well from Rashford who also went close from distance but the Reds were rampant and extended our advantage further three minutes before the break.
Once more, it was a crisp passing move that cut through Fulham, with Jesse Lingard sliding a ball into Mata’s run down the left and his cross was met by Lukaku’s left boot to steer the ball in from close range. It was the Belgian's first goal in these parts since March, 997 minutes after his last.


Ranieri sent on Kamara and Luciano Vietto in place of Aleksandr Mitrovic and Tom Cairney at the interval, but United continued to dominate and rediscovered the first half swagger through Ander Herrera, whom forced a smart stop from the lunging Rico.
Andre Schurrle's rising drive encouraged the rallying visitors, before substitute Kamara was scythed down by Herrera and dusted himself down to score from 12 yards and deny United their clean sheet.

Anguissa was then dismissed for a wild lunge on Rashford to end any lingering hopes - however faint - the visitors may have had of a comeback.

It had taken some time but United finally got our mojo back, led superbly by Rashford, who firstly danced his way into the box but had his shot saved, then he coolly slid in a pass for Lukaku who, again, was thwarted by keeper Rico.
Having been denied at close range Rashford decided to have a go from further out and how it paid off. From an unlikely position, he struck a venomous shot that beat Rico at his near post for a spectacular fourth in the 82nd minute.

It was an eye-catching finale to send the Old Trafford crowd home happy in the last game here before Christmas.

Overall team performance: 8/10. Cohesive and fluid even against a poor Fulham side
United Faithful Man of the Match: Marcus Rashford. Honourable mentions to Diogo Dalot and Juan Mata.
Posted by United Faithful at 13:57
Labels: match reports