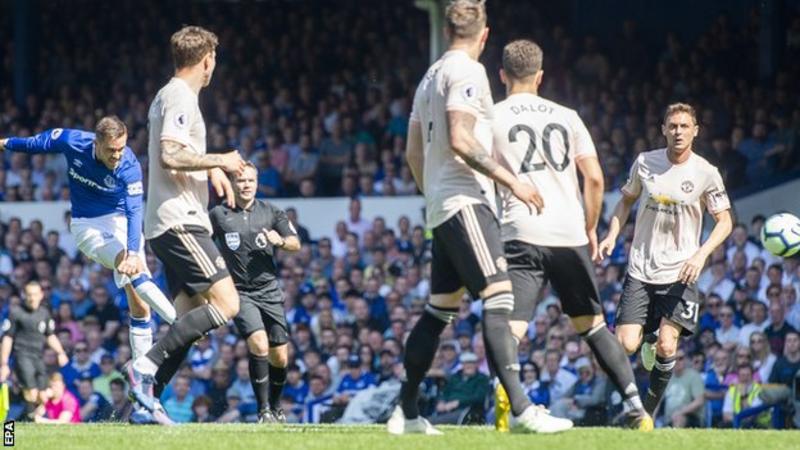 Marco Silva's rampant Toffees inflicted further woe on the ragged Reds as Ole Gunnar Solskjaer's side were brutally put to the sword at Goodison. United face an increasingly perilous plight to secure a quickly fading top four place after 90 minutes which were nothing but torture.
In-form Everton had beaten Chelsea and Arsenal in their last two league home fixtures and rose to seventh in the battle to become the league's best of the rest after exposing the plethora of problems facing Solskjaer.

Much maligned United keeper David de Gea had saved superbly from Richarlison before the Brazilian hooked in an excellent 13th-minute opener. De Gea was then beaten by Gylfi Sigurdsson's 25 yarder, Lucas Digne volleyed in a third and substitute Theo Walcott slammed in the fourth after half time.
United have lost six of their past eight games in all competitions, while a fifth successive away defeat - for the first time since 1981 - leaves them facing the prospect of Europa League football next season. Oh, happy days. But the truth is, if by some miracle we do manage to scam a place in the top four, we'd have stolen a Champions League status that we simply do not deserve.
With Sigurdsson pulling the strings in midfield and Richarlison proving a real menace to the United defence, the Reds were forced to retreat early on, thanks to a series of Everton set-plays. From one of those, the ball dropped to Idrissa Gueye, who sent the ball back in and only a brilliant reaction save from David De Gea prevented Richarlison from firing the hosts ahead.


Two minutes later, the Brazilian scored. A long throw-in from the left by Digne was flicked on and Richarlison spectacularly volleyed home into the roof of the net.
The Reds were struggling to get a foothold in the game but got a first glimpse of goal on 19 minutes when an excellent Paul Pogba ball over the top was flicked over the bar by Marcus Rashford.

United had another chance to apply some pressure on 28 minutes after winning a corner, but Rashford’s ball in was cleared, allowing Everton to break forward. Sigurdsson collected from Gueye and led the charge over the halfway line before taking aim, unopposed, from 25 yards and firing into the bottom corner past De Gea.
A slight mix-up in the United defence – when De Gea attempted to find Dalot with a throw – led to another chance as half-time approached but the Spanish stopper recovered well to prevent a second for Richarlison.

Unfortunately, the Toffees further extended their lead on 56 minutes when De Gea’s punched clearance from a corner fell to the unmarked Digne outside the area and the Frenchman fired home low in the corner.
Minutes later, Sigurdsson almost scored directly from a corner, but De Gea stuck out a foot to clear it. The Spaniard could do nothing to stop Everton netting a fourth just after the hour-mark as the outstanding Sigurdsson slipped the ball into the path of the onrushing Walcott on the left touchline and the forward skipped towards goal before slotting home. Spineless, gutless, pathetic and f******g embarrasing.

Overall team performance: 0/10
United Faithful Man of the Match: Fucking no one they're all shit