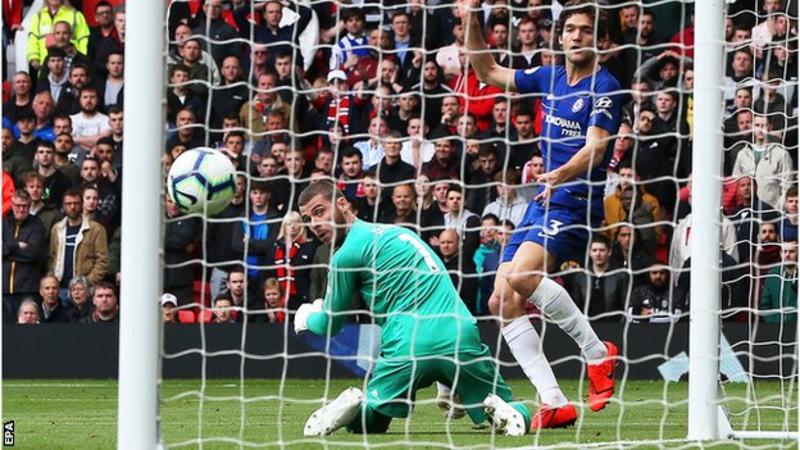 Another howler from David de Gea gifted Chelsea a fortuitous equaliser and all but ended United's hopes of Champions League qualification. With United 1-0 up and on course for a priceless victory against direct top four rivals in a must win game, De Gea spilled Antonio Rudiger's speculative shot from distance and allowed Marcos Alonso to sweep home the leveller.

United went into the game three points behind Maurizio Sarri's west London side in a top four tussle that no one has taken charge of or, indeed, even seems to want. Things remained that way after a draw that was, in truth, probably a fair result. United have two games left against relegated Huddersfield and surely-gone Cardiff.

With Tottenham losing at home to West Ham on Saturday and Arsenal's heavy loss at Leicester earlier on Sunday, this result means none of the teams placed between third and sixth won over the weekend.
Five points separate Tottenham, Chelsea, Arsenal and Manchester United with 180 minutes of the Premier League season remaining.

Rudiger let fly from 30 yards with Chelsea's first shot on target two minutes before the interval.
It looked a routine save for a player of De Gea's ability and quality, but the ball spilled from his grasp and Alonso reacted quickly to tuck home his first Premier League goal since 18 August. It was the latest in a series of high profile blunders in recent weeks.
He was culpable for at least one of Manchester City's two goals in the derby loss at Old Trafford, having been at fault for Lionel Messi's second in the defeat at the Nou Camp in the Champions League on 16 April. That's before you throw in him getting stuck in the mud for Wolves winner in the league and Granit Xhaka's effort at the Emirates which should have been a straightforward stop.

It was a costly error by the desperate Spaniard, whose form has come under scrutiny in recent weeks, although De Gea did come to his side's rescue deep in stoppage time to deny Gonzalo Higuain a dramatic winner.
In a feisty, uncompromising tie, Rudiger was forced off through injury before Marcus Rashford and the luckless Eric Bailly - on his first start for six week - followed suit.
Continuing the recent trend, Ole Gunnar Solskjaer's side came flying out of the traps and started well. Romelu Lukaku had an early effort saved by Kepa, before the Belgian was involved in United's eleventh-minute opener. His flick over the top found the excellent Luke Shaw, who cut the ball back for the onrushing Juan Mata to score against his old side.
Bailly flashed a header wide and Kepa saved a Marcus Rashford set-piece, before Alonso's gift restored parity at the break.

Chances were at a premium after the break, although N'golo Kante flashed a shot wide and substitute Marcos Rojo had a header cleared off the line by fellow replacement Pedro.
Rojo was then fortunate to escape censure when he clattered into Gonzalo Higuain and then scythed down Willian with a two footed lunge.