Man Utd re-ignited hopes of a top four finish after beating West Ham despite an impressive showing from Manuel Pellegrini's out of form Hammers.
After back-to-back defeats, United claimed a vital victory thanks to a pair of Paul Pogba penalties that lifted the Reds up to fifth and clinging to the coat-tails of Tottenham and Chelsea.
With this league encounter sandwiched between the double header of a Champions League quarter final with Barcelona, Ole Gunnar Solskjaer made five changes to his line-up, having to contend with the suspension of regular full-backs Ashley Young and Luke Shaw. That led to very much a makeshift line up and it showed, with United given an almighty scare by the visitors, who remain very much in the running for seventh place.

That meant a first start in four months for Marcos Rojo and Diogo Dalot reverted to a more familiar right-back role after moonlighting as a left wing-back for the visit of Barcelona in midweek. Dalot was involved in the game's first major moment, which proved a contentious one after nine minutes. West Ham should have taken the lead when Felipe Anderson volleyed in, only to be flagged offside. Replays showed that Dalot had played the Brazilian onside and United had got away with one.
Then Graham Scott awared a penalty when Robert Snodgrass raced back to thwart an attack but he did not play the ball as he challenged Juan Mata. Contact looked minimal but Pogba took advantage and rifled the resultant spot-kick beyond Lukasz Fabianski in the 19th minute.
Former Manchester City manager Manuel Pellegrini's men would not lie down, though, and deservedly hit back after the interval. Anderson was impressive throughout -  as he has been all season - and capitalised on a mistake from David de Gea and Rojo as he swept the ball in to level shortly after the restart.

Chris Smalling headed over the bar and the introduction of Marcus Rashford belatedly sparked United into life. The sub's arrival almost paid instant dividends as Smalling burst out of defence and found the striker with his pass. Rashford thumped in an effort that Fabianski could only parry, and the loose ball agonisingly squirmed away from an onrushing posse of players.
Rashford went close again with a header, but the initial United spark petered out and West Ham continued to look a threat. Substitute Michail Antonio had United - and the crossbar - rattled with a 20 yarder and then his header needed a brilliant reaction stop from David de Gea to prevent the Hammers from taking a lead. 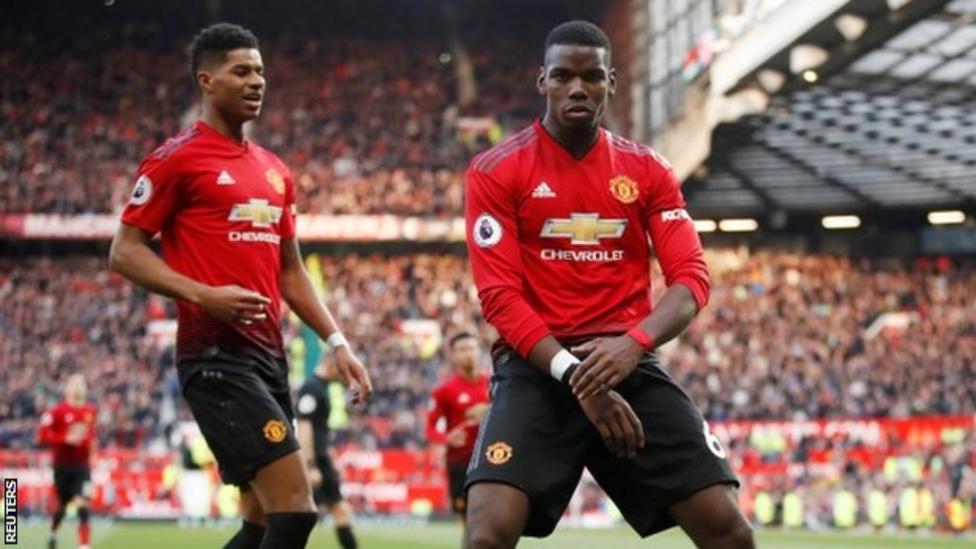 There was little doubt around the foul for United's second penalty, when Martial got in behind the defence and Fredericks brought him down when making a last-ditch attempt to deny the Frenchman a shot.
Fabianski vs Pogba part two ended with the same result as  Pogba smashed in from 12 yards ten minutes from time as the Reds held on for a vital win.

Posted by United Faithful at 01:30