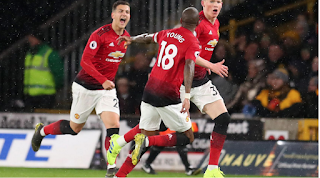 United suffered a second self-inflicted fate at Molineux in the space of a fortnight after Chris Smalling's comedic own goal sent the ten man Reds to a third loss in four.

The result damaged United's hopes of a top four finish, despite a blistering start in which Scott McTominay's first senior goal had looked to send the Reds on their way.
But FA Cup semi finalists Wolves hit back through Diogo Jota, who capitalised on Fred's mistake and David de Gea's failure to react. After captain Ashley Young had been sent off, De Gea got stuck in treacle and Phil Jones headed against Smalling whom inadvertently turned the ball his own stranded keeper.


The defeat was the first under Ole Gunnar Solskjaer since he was given the United manager's job on a full-time basis and left us fifth in the Premier League.
United are level on points with fourth-placed Tottenham and two points behind Arsenal in third, but have now played a game more than both London clubs.

It was a gift for Wolves who would have been scarcely able to believe their luck having had to weather an early United storm. Jesse Lingard went close inside the opening seconds, and Rui Patricio then saved well from the returning Lingard and Romelu Lukaku should have done better with a header.
McTominay was next to chance his arm, but it was he whom put United ahead on 13 minutes when Lingard found Fred, the Brazilian teed up his colleague and McTominay's 20-yard daisy cutter flashed past Patricio and in.


Much of the pre-match conversation had focused on Wolves potentially having one eye on their  FA Cup semi-final with Watford at the weekend, but the home side were clearly in no mood to roll over.

Unfortunately for the Reds, they responded by showing the attacking form that has won them so many plaudits and equalised thanks to a fine finish from Jota, after he had beaten the offside trap. De Gea had tried to play out to Fred, who squandered possesion. Raul Jimenez seized on the loose ball, poked in his strike partne

The men in gold applied more pressure at the end of the first half and Ruben Neves forced a good save out of David De Gea, with a looping shot from range.
r and Jota did the rest from close range.

Lukaku went close to restoring United's lead when his angled effort rolled inches wide, and McTominay then had a header saved by the overworked Patricio shortly after the restart.

Just as some momentum was building, Solskjaer’s ranks were reduced to ten men as a result of Young receiving his second yellow card of the half for fouls on Jota. The 'captain' was sent off by referee Mike Dean, who no doubt relished branding his 100th Premier League red card.
Substitute Jones came on in an attempt to try and shore up the back and he was involved instantly as his unlikely drive from distance fell to Diogo Dalot. Dalot let fly with an ambitious 25-yarder but Patricio was untroubled and watched it over the bar.

Wolves took the lead after 78 minutes in fortuitous circumstances, with Joao Moutinho's cross causing a goalmouth scramble that resulted in Smalling inadvertently knocking the ball into his own net.
Nuno Espirito Santo's side almost scored again late on through substitute Ivan Cavaleiro, whose powerful shot bounced off the crossbar in the last meaningful piece of action.