Patrick van Aanholt smashed in a fortuitous injury time winner just when it looked as though United had salvaged a point. Dan James equalised with his second successive Old Trafford goal on 89 minutes, but full-back van Aanholt netted in the 93rd, thumping in under David de Gea as the ball broke loose after Wilf Zaha had burst forward. 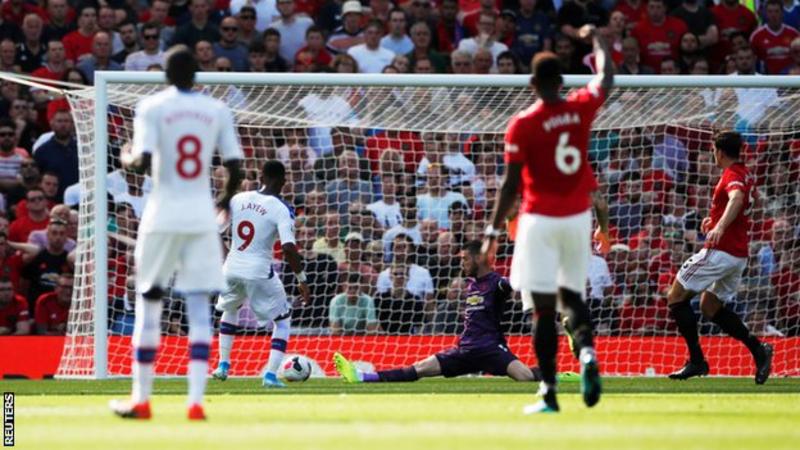 The Reds were left to rue another failure from the penalty spot - Marcus Rashford this time the unlucky man when he fired off a post after the interval. Paul Pogba had a spot-kick saved in the 1-1 draw at Molineux earlier in the week. Whilst many will see this as a shock, in reality it comes as no surprise at all.

Jordan Ayew had scored the opener in the first half against the run of play, latching on to Jeffrey Schlupp's flick-on and coolly converting Palace's first goal of the campaign, before the late drama.
James curled in a wonderful leveller a minute from time after equally excellent build up that involved Rashford and Anthony Martial.

Scott McTominay went close with a header, and Rashford had a couple of early sighters from set pieces. Palace had barely threatened but went ahead with their first attack shortly beyond the half hour mark. Ex United triallist Jeffrey Schlupp outjumped Victor Lindelof and flicked on for Ayew, who raced through - unmarked - to roll the ball under the advancing De Gea.

The United keeper made amends when he denied Zaha from close range, although the goal would have been ruled out on VAR due to an offside in the build up.

Attacking the Stretford End, there needed to be a response after the restart and there was a moment of danger for Palace when Young's deep cross was met by James at the far post, but deflected wide off van Aanholt.


Solskjaer introduced Mason Greenwood for Jesse Lingard but the visitors continued to stand firm until McTominay burst into the box to force a penalty in the 69th minute. Greenwood's pass was laid off by Martial and McTominay was tripped to hand the Reds a spot-kick for a third successive match this term.
Rashford, who scored a penalty against Chelsea, stepped up but, despite sending Vicente Guaita the wrong way, his shot struck the inside of the keeper's right-hand post, to the utter frustration of the majority at Old Trafford.

McTominay fired wide, off balance and Pogba's header cleared the bar as United just could not muster a decisive effort. VAR threatened to intervene when Rashford latched on to a flick by James to speed past Martin Kelly and was felled by the centre-back's challenge. Referee Paul Tierney's initial decision stood and, with nine minutes left, the Reds were staring down the barrel of a costly defeat.
However, James looked to have earned a point when he curled home beautifully, after Pogba tackled Zaha and combination play by Martial and Rashford created the opening. It came with a minute of normal time left and should have sparked a late siege on Guaita's goal.
Instead, three minutes into the five that were added on due to the numerous stoppages in play, substitute Christian Benteke tackled Pogba to spark a move that culminated in van Aanholt's drive going through De Gea's defences to hand Palace an unlikely winner.