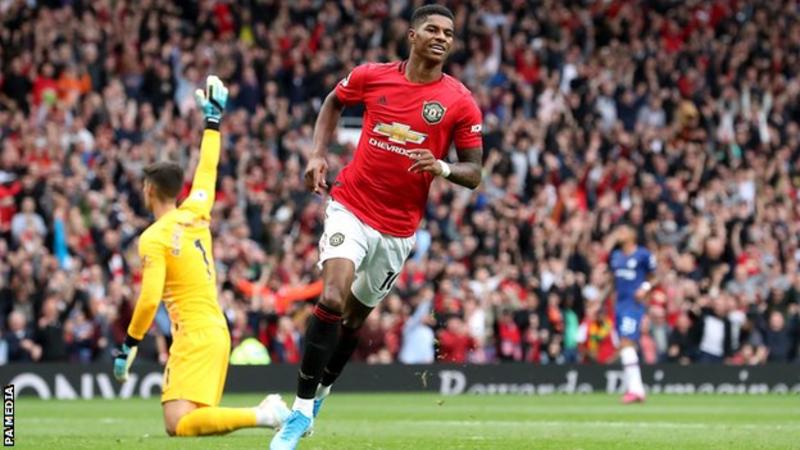 Manchester United sent out an impressive statement of content with a 4-0 thumping of Frank Lampard's youthful Chelsea on the opening weekend.
Marcus Rashford put United ahead from the penalty spot after 18 minutes, Anthony Martial marked his second era in the number 9 shirt with a goal, and Rashford then made it three as the Blues crumbled. Substitute debutant Dan James slammed in the fourth, and fellow summer signings Aaron Wan - Bissaka and Harry Maguire enjoyed impressive competitive United bows.  It was the Reds biggest Old Trafford win over Chelsea since 1965.

In truth, it was a scoreline - if not a result - that slightly flattered Ole Gunnar Solskjaer's side, after the Stamford Bridge side had rattled the woodwork twice through Tammy Abraham and Emerson.
Abraham's chance came after only four minutes when he volleyed a drive off the upright having been picked out by Ross Barkley.
Another Blues youngster, Mason Mount, who played under Lampard at Derby lasy year, took the wrong option and cut the ball back instead of pulling the trigger. The ball rolled across goal and through to new full-back Wan - Bissaka who cleared the danger from close range.

New Reds captain David de Gea saved well from Pedro but the breakthrough was not long in coming and duly arrived on 18 minutes. Rashford went down under a challenge from the lunging Kurt Zouma and dusted himself down to fire the spot-kick low beyond Kepa with aplomb.

De Gea was called into action again - this time to repel an Emerson shot from distance - and the same player went close again when he struck the crossbar on the angle after Mateo Kovacic had played him in.

The Reds were slightly fortunate to go in at half time ahead, but Solskjaer's side stepped up a gear and quickly put the game beyond doubt with two goals in as many second half minutes.
First, Martial bundled the ball home after Andreas Pereira had picked him out in a move started by immense United debutant Harry Maguire. Then, a defence splitting Paul Pogba pass cut Chelsea open to find Rashford, who raced through and slotted home beyond the advancing Kepa.

Pogba has been linked with a move away throughout a summer of uncertainty, but showcased his world class credentials with a simply sensational flicked pass to set up Rashford and make the tie safe.

James, a summer buy from Swansea, replaced the hard-working Pereira on 74 minutes and then, seven minutes further on, he capped his debut with a dream goal. Pogba was involved again as his slide rule pass found the young Welshman and he smashed the ball across Kepa and into the corner. An emotional celebration followed, with James mobbed by his exultant team mates as he pointed to the sky - his father having died just a matter of days after his move to United.

Chelsea's own expensive export, £58m Christian Pulisic was rendered almost anonymous having himself stepped off the bench shortly before the hour mark. N'golo Kante - another sub - went close to a consolation but it proved the last action of comprehensive and massively satisfying opening win.

Posted by United Faithful at 16:23