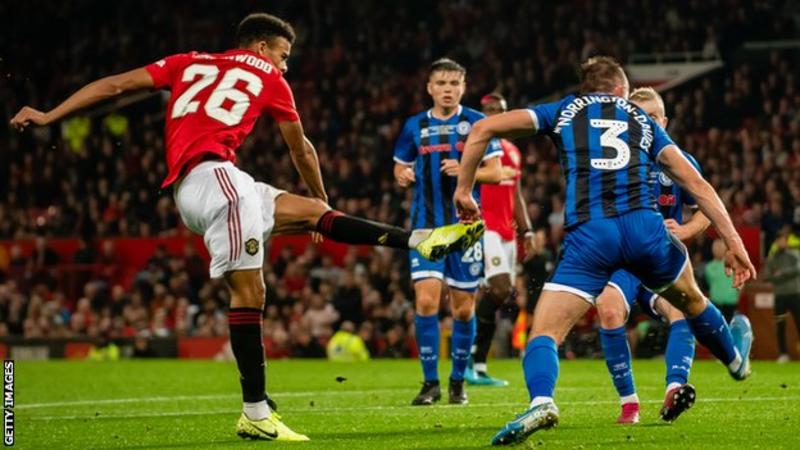 Manchester United needed a penalty shootout to squeeze into the fourth round of the Carabao Cup at the expense of plucky League One neighbours Rochdale.
The Reds had endured penalty drama for the second season running, having been knocked out by Frank Lampard's Derby at the corresponding stage a year ago. This time we converted all five spot-kicks to avoid a huge shock and set up a fourth round tie away at Chelsea.
Dale's Jimmy Keohane was the only player who failed to score in the shootout with Sergio Romero saving his effort. Juan Mata, Andreas Pereira, Fred, Greenwood and Dan James were all successful for the Reds from 12 yards.

Mason Greenwood put United ahead with a low strike but 16-year-old Luke Matheson smashed home a famous equaliser 14 minutes from time for the third tier side.
United mustered 31 shots but once again a lack of cutting edge proved costly with Greenwood, captain-for-the-night Axel Tuanzebe and half time sub Brandon Williams the main positives.

The returning Paul Pogba went close from distancce and shooting on sight soon became the rotated Reds raison d'etre. Andreas and Fred both had attempts blocked then Andreas had another blockbuster beaten away by keeper Robert Sanchez.
The unlikely figure of Marcos Rojo almost scored twice in quick succession with a stooping header that was saved and another effort that flew inches wide.
Pereira's shot deflected wide off Keohane but Rochdale then sprung forward and almost sent shockwaves around Old Trafford. Brian Barry - Murphy's side came within inches of taking a seismic lead as ex-Red youngster Oliver Rathbone calmly and cleverly danced his way into the box and got close to goal before he played in Callum Camps.
His mishit snapshot was cleared off the line superbly by Aaron Wan-Bissaka to get United off the hook.

The goalmouth action was heating up and the Reds hit back with a left-foot drive by Greenwood slipping just past the post. Jesse Lingard and Greenwood both went close, with the latter being set up by James soon after he replaced Tahith Chong.

In the 68th minute, sub Williams showed his power and drive as he went at Rochdale and United then switched the ball out to Reds striker Greenwood via Lingard. Against Astana, he fired in with his right foot but this time he got the ball onto his left and cracked the ball home to break Rochdale's stubborn defiance.

United only had eight minutes in the lead before the visitors stunned Old Trafford.

On a night for fresh-faced youngsters it was Dale's own teen, Matheson, who levelled the tie up in the 76th minute. He half-volleyed Rathbone's high cross into the net as he burst in from the right, with the bounce taking it over desperate attempts to clear by Pogba on the line.

United's desperately tried to avoid the penalty shoot-out but couldn't come up with a winner in added-on time, with Wan-Bissaka, Fred and Andreas passing up openings. It was left to James to ensure the Reds progressed to face Chelsea in the next round with the 5-3 win on penalties.

Posted by United Faithful at 01:37