United were forced to settle for a point as a towering Jannik Vestergaard header cancelled out another Daniel James goal for the ten man hosts.

The Reds had won one, drawn one and lost one from their opening three games, and had looked on course for another win through James early stunner, with the young Welshman again proving United's biggest attacking threat.

Saints, however, gained momentum in the second half as a disappointing United side grew increasingly sloppy, and Vestergaard capped a spell of pressure with the equaliser just before the hour - his first goal for the club.

Che Adams had blazed wide of an open goal and David de Gea had saved superbly from Danny Ings before the giant figure of Vestergaard rose to meet Kevin Danso's fine cross. Danso was then sent off for a reckless lunge on Scott McTominay, but we were unable to take advantage as Saints keeper Angus Gunn repelled the Reds as United laid siege in the closing minutes. 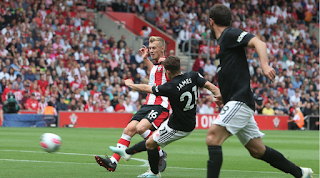 Gunn saved superbly from substitute Mason Greenwood and the erratic Marcus Rashford, while both Jesse Lingard and Ashley Young were narrowly off target. Despite mounting a late assault and Saints numerical disadvantage, United were unable to find the killer touch and have picked up five points from our opening four games.

Ole Gunnar Solskjaer was forced to make changes from the side who faced Crystal Palace last weekend, with Luke Shaw and Anthony Martial injured for the trip to the south coast. Ashley Young and Juan Mata were their replacements, the experienced duo making their first league starts of the season and Andreas Pereira came in for Lingard.


The hosts threatened early on, putting pressure on centre-backs Victor Lindelof and Harry Maguire at every opportunity but it was the Reds who took an early lead.
Scott McTominay did well to not only maintain possession in the middle but to find James in space on the left with an excellent pass. The Wales international cut inside, having used Mata’s clever overlapping run as a decoy, and thundered a fierce shot beyond Gunn to score his third league goal in four.

Ralph Hasenhüttl’s youthful and energetic side ended the half much as they had started it - on the front foot. Danny Ings’ volley dropped wide thankfully and McTominay did well to block a Sofiane Boufal effort from 20 yards out as United kept the home side at bay, going into the break a goal to the good.

Southampton picked up where they left off at the restart and after Lindelof had lost possession on the half-way line Boufal found Adams in space in the area but he sliced wide from 10 yards out when he really should have hit the target.

James, a constant threat throughout the afternoon, had three opportunities in as many minutes as the clock ticked down, stinging the palms of Gunn before skewing a volley back out to the impressive Aaron Wan-Bissaka on the opposite side and then failing to connect with a cross to him at the back post.
The Reds continued to pile on the pressure as Rashford saw his low shot kept out and substitute Greenwood saw his excellent curling effort kept out by Gunn ensuring the points were shared.

Posted by United Faithful at 01:21