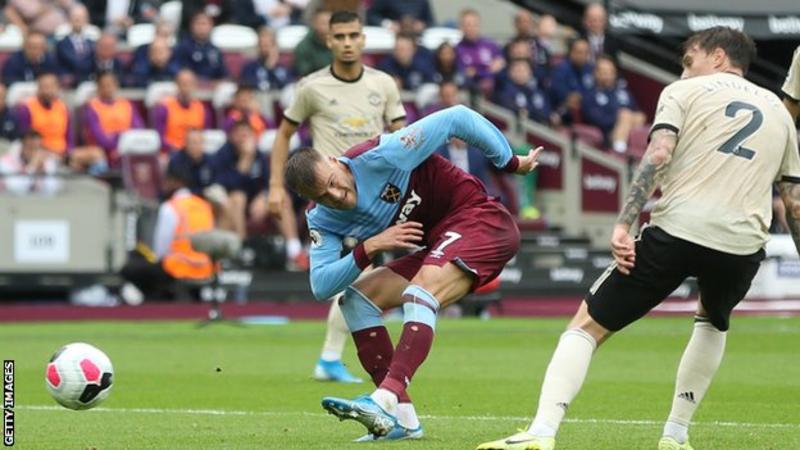 Manuel Pellegrini's West Ham secured victory over the Reds for the second successive season and inflicted a ninth away game without a win on Ole Gunnar Solskjaer's United.
The  Hammers had swept United aside 3-1 on our last visit to east London and - whilst this was not quite as bad as that - the result and margin of victory was the same.


United have now not won the road in the league since a 3-1 win at Crystal Palace at the end of February.

To quite literally add insult to injury, Marcus Rashford limped off through injury to leave the Reds without a fit recognised striker. Jesse Lingard was pressed into service as an auxiliary centre-forward but was unable to make an impact as United's already thin squad was stretched to the limit.

Nemanja Matic and Rashford were the sole survivors from Thursday's Europa Cup win, with teenage striker Mason Greenwood - United's match-winner against the Kazakh side - unavailable due to tonsillitis.

Andriy Yarmolenko's superb opener gave West Ham the lead before Aaron Cresswell sealed the deal with a free-kick - that David de Gea should have done better with - six minutes from time. The result continues an impressive start to the campaign for Pellegrini's men who climb to fifth whilst, in contrast, Solskjaer's side drop to eighth with six games played.

Yarmolenko opened the scoring on the stroke of half-time, sending a low finish beyond de Gea following patient build-up play involving Mark Noble and Felipe Anderson.
Cresswell sealed all three points for the hosts in the second half with a superb free-kick into the top right-hand corner. Chances were at a premium in a cagey first half at London Stadium, with Noble's deflected effort from Pablo Fornals' free-kick the closest either team came to a breakthrough before Yarmolenko's strike. The fit again Ukranian was a constant menace, giving United no end of problems with his trickery and power. He played in Felipe Anderson who almost made it 2-0 but fired at De Gea on the angle.

Juan Mata - otherwise one of our better players - missed a sitter when he could only turn wide with the goal gaping from Andreas Pereira's cross. Matic tested Lukas Fabianski from distance, before Harry Maguire also went close when the Hammers had failed to clear their lines from a corner.

Soon after, De Gea held Yarmolenko’s speculative effort, before Rashford’s dangerous run was snuffed out by the Hammers’ defence. De Gea turned away Anderson's effort, and Cresswell went close with a set piece. United failed to heed that warning though as Cresswell made no mistake with his second attempt from 25 yards after Ashley Young had scythed down Noble.

Dan James fired into the side netting after he had burst clear, but that proved to be the final action of a day when the Reds shortcomings were brutally exposed.

Posted by United Faithful at 02:08