A stunning Marcus Rashford free-kick fired United past a youthful Chelsea side and set up a Carabao Cup quarter final at home to Colchester. 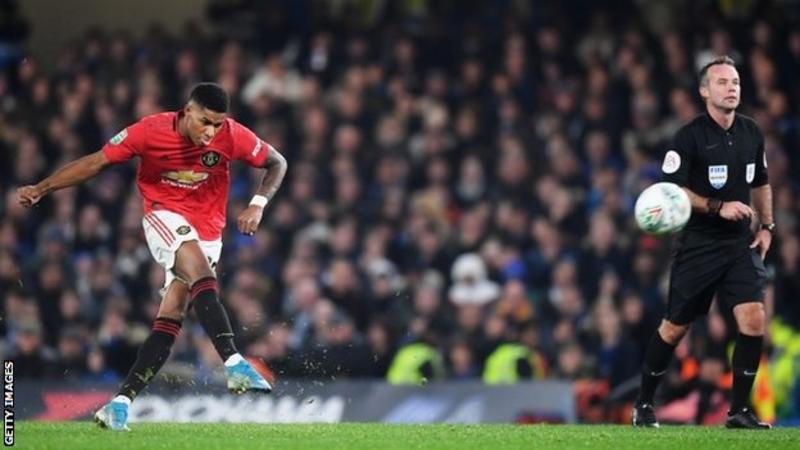 Rashford's third goal in four games had put Ole Gunnar Solskjaer's strong selection ahead, but the Blues responded through Michy Batshuayi's excellent equaliser.
The tie appeared to be heading towards a penalty shootout, but Rashford had other ideas with a swerving, dipping 30 yard set piece that left Willy Caballero flailing.

On the eve of his 22nd birthday, United's number 10 has been revitalised in recent weeks and has now hit four goals in as many games for club and country.

After a run of six games without a win, United have now picked up three away wins in a row in three different competitions, and continued to build the momentum kick-started by the draw with Liverpool.
Brandon Williams was the only youngster to start in an experienced team that hinted Solskjaer sees this cup as a realistic chance of silverware.
Scott McTominay had already fizzed a shot when Rashford - who missed from the spot against Norwich - put United ahead after Dan James had been scythed down.

James also went close before he burst into the box and was hauled down by a clumsy Marcos Alonso challenge on 25 minutes. United have a poor record from the spot this season but that did not matter as Rashford sent Caballero the wrong way and fired the spot-kick low into the corner.
A Reece James cross was met by a powerful Aaron Wan - Bissaka clearance (is there ever any other kind?) and the lesser-spotted Christian Pulisic was halted by Marcos Rojo as he burst clear in the closing stages of the half.

Rojo blocked from Billy Gilmour and Callum Hudson - Odoi should have done better, but Frank Lampard's side made their pressure tell with their only effort on target to that point.

The Belgium international latched onto a Caballero clearance just inside the Reds’ half, carried the ball to the edge of the box before finishing his run by stroking an effort out of Romero’s reach and into the bottom-right corner.


It was Rashford who would restore the Reds’ lead with a stunning free-kick and make the decisive difference. Struck from a central position, the ball looked as if it moved twice in the air, leaving Chelsea’s keeper Caballero helpless.

Despite bringing on their top scorer Tammy Abraham late on, Chelsea couldn’t find another leveller and Zouma’s poor effort in the closing stages which flew into the crowd summed up the hosts’ frustrations.