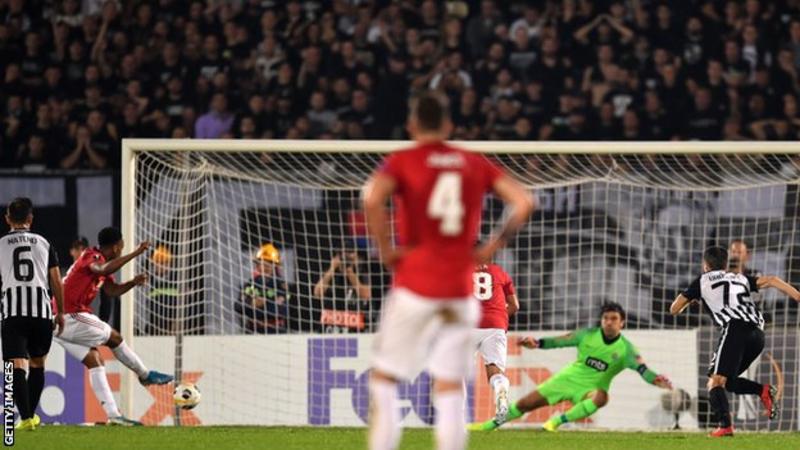 Anthony Martial marked his return to fitness with the decisive penalty as United won away for the first time since March and moved top of our Europa League group.
Martial, making his first start since August, sent Vladimir Stojkovic the wrong way from 12 yards after the visitors impressive 19-year-old defender Brandon Williams won the spot-kick.

Ole Gunnar Solskjaer's United hadn't won an away game of any description since that night in Paris, but this was a hard fought and even contested victory that puts the team in pole position at the summit of Group L. United had to dig deep but the win will come as welcome relief for Solskjaer, who again stuck with the 3-5-2 system that had effectively nullified Liverpool last time our.

Williams and 18-year-old midfielder James Garner were among seven changes made by Ole from the side that started in that game against Liverpool on Sunday.
And initially at least, United controlled possession, with Scott McTominay wastefully heading Juan Mata's free-kick wide and Jesse Lingard's curling effort striking the right-hand post.
However, the hosts carved out chances of their own with on-loan Roma forward Umar Sadiq bending a 20-yard strike against the post.
United keeper Sergio Romero superbly preserved the visitors' lead by parrying Seydouba Soumah's drive after the midfielder had cut past captain for the night Harry Maguire.
Former Red Zoran Tosic went close from a set-piece in front of a boisterous, capacity crowd in Serbia.


As half-time approached, Partizan began to enjoy a sustained spell of pressure which resulted in Umar Sadiq smashing a shot onto Romero’s far post and, just a couple of minutes later, Takuma Asano went for the same corner but fired just wide.
It was the Reds who finished the half on top though, thanks to a brilliant run forward from the impressive Williams. The youngster powered down the left and into the box before being tripped by Nemanja Miletic. The referee pointed to the spot and Martial despatched it with aplomb.

Romero saved well from Soumah and United survived half hearted penalty appeals when Bilbras Natcho's shot struck the arm of McTominay in the box.

The United midfielder could do nothing about it and the referee again waved play on. He opted for the same decision seconds later, when the ball hit Williams’s arm, which only served to further rile the home faithful. Romero was called into action, seven minutes from time, when Asano flicked a header goalwards from a corner, but the United goalkeeper saved well once more. Moments later, Natcho swept a drive inches off target as Marcos Rojo moved out to close him down.