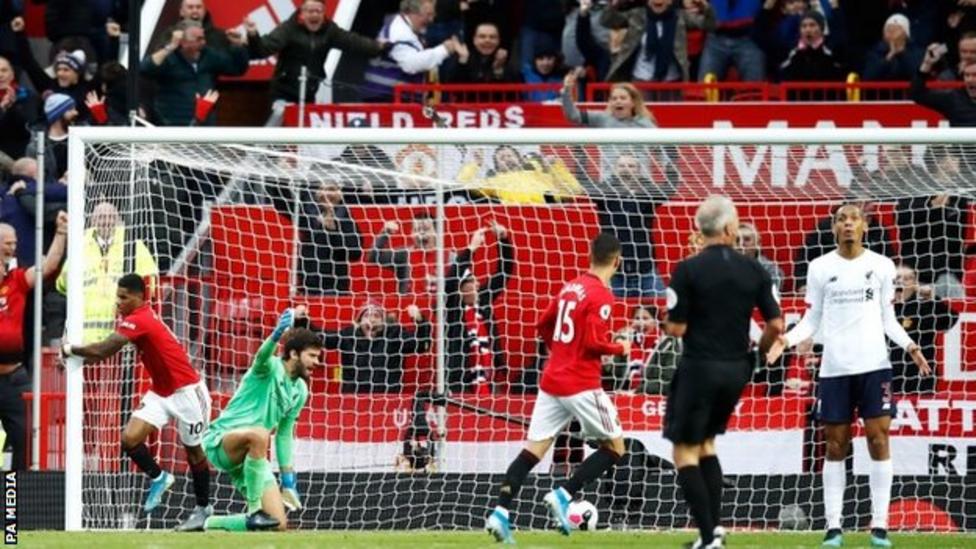 A late Adam Lallana leveller denied Manchester United a famous and much-needed victory after Marcus Rashford's contentious VAR-assisted opener.
Jurgen Klopp's side came into the Old Trafford contest as early Premier League pacesetters having won all of their first eight league fixtures so far but saw their 100% record ended by a much improved performance from Ole Gunnar Solskjaer's United.

United came within five minutes of a defiant, against-all-odds victory but substitute Lallana popped up at the far post to turn in Andy Robertson's cross and preserve his side's unbeaten start to the season. It meant their advantage at the summit of the league has been cut to six points with manager Klopp yet to taste victory at Old Trafford after four attempts.

Liverpool were in search of their 18th successive league win to equal Manchester City's top-flight record set between August and December 2017 but had to settle for a point after a scrappy encounter.
Marcus Rashford's hotly-contested first-half goal, allowed after a video assistant referee check for a foul by Victor Lindelof on Divock Origi, looked to be condemning Liverpool to their first league loss since they went down at Manchester City in January.
Rashford finished superbly from a Daniel James cross on 36 minutes before the visitors - who saw a first half effort from Sadio Mane ruled out for handball - hit back.

Klopp's side even threatened to snatch an undeserved victory, but substitute Alex Oxlade-Chamberlain's shot flashed inches wide.
Solskjaer's United had set up in an unfamiliar 3-4-1-2 formation with Marcos Rojo a very late replacement for the injured Axel Tuanzebe. David de Gea was fit to start, and the returning Aaron Wan-Bissaka came in as a right wing-back with Ashley Young on the opposite flank.
Alisson, himself back after injury, was called into action early on when he got down well to deny the impressive Andreas Pereira before Scott McTominay - another all-action man at the heart of the midfield - also went close.

Even without Salah, the visitors’ threat on the break was still apparent and it was on the counter that the Merseysiders had their best chance of the opening half.
Mane pulled free down the right, in the area the Egyptian would usually occupy, and pulled back for Firmino, who should have done better than to hit the ball straight at De Gea.

The Brazilian was left to rue his miss when, a minute later, Rashford opened the scoring. Victor Lindelof’s challenge on Divock Origi in our half went unpunished by Martin Atkinson and, when the ball broke free, James flew down the right and crossed, finding our no. 10 who slipped by Joel Matip and tapped the ball home. Old Trafford erupted but celebrations were briefly kept in check by VAR, which correctly ruled the goal to be legal after replays showed there was the slightest contact on Origi by Lindelof. The incident occured on halfway and the Belgian had been going down anyway.

The Merseysiders were further aggrieved when, five minutes later, Mane’s apparent equaliser – after he beat Lindelof to a high ball and slipped it home – was ruled out by VAR due to the Senegal international handling in the build-up.
Rashford skewed a shot inches wide and Fred tried his luck from distance in two good United chances shortly after the restart.

Our midfield quintet were putting the hard yards in to prevent Liverpool from finding time and space in the centre of the park and also providing a threat at the other end, as Fred again went close with a 25-yarder from the right. As the minutes ticked by, it looked like it would be United’s day, but substitute Lallana found himself free at the back post, and crucially onside, to equalise with five minutes to go.

Buoyed by the goal, Liverpool pushed for the win and hearts were in mouths when Trent Alexander-Arnold's rising effort flew just over De Gea’s crossbar and then when Oxlade-Chamberlain sent the keeper sprawling in injury time, only to see his shot go just wide.
But Solskjaer's side held on and exited the pitch to a standing ovation, a recognition of their excellent effort and work rate.

Posted by United Faithful at 02:08