United climed to the heady heights of seventh after a first away league win of the season over struggling Norwich.
Ole Gunnar Solskjaer's side would have won by more if not for two Tim Krul penalty saves - the Reds have been awarded six spot-kicks this season but have failed to score with four of them. 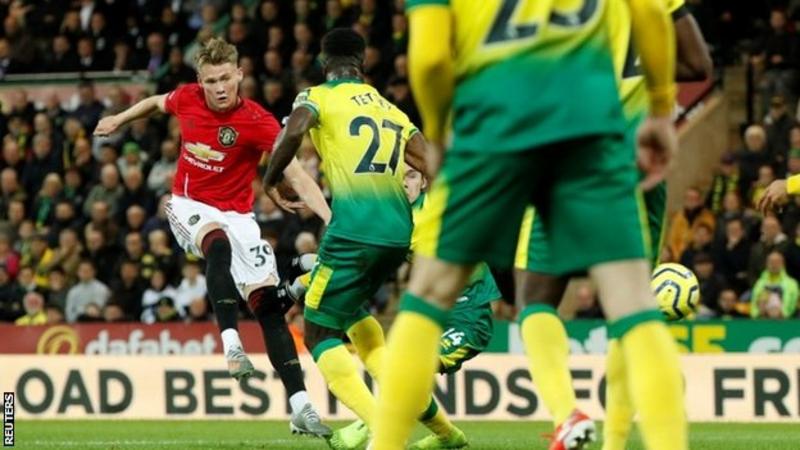 Having broken our away duck in Serbia on Thursday, United are beginning to build some momentum and confidence, spearheaded by the return of Anthony Martial.

Scott McTominay slammed in an opener moments after a stunning reflex save by Krul to deny the Frenchman from point blank range. The Academy graduate's strike - his second of the season - proved historic, coming as United's 2000th Premier League goal, the only side to hit that landmark.

The Reds were then contentiously awarded a spot-kick when Dan James was adjudged to have been scythed down by Ben Godfrey - only for the Canaries keeper to beat away Marcus Rashford's effort.


Rejuvenated Rashford grabbed his third goal in as many games for club and country before Krul saved another penalty - this time from Martial - after Todd Cantwell's handball. Again, like Rashford though, Martial shrugged off the miss and added a third in vintage United fashion when he clipped home over the advancing Krul after a flowing five man move.

Norwich scored a late consolation through substitute Onel Hernandez, who took the ball off McTominay, ran at the defence and fired past David de Gea to become the first Cuban-born player to score a Premier League goal.
It was United's first away league win for eight months and lifted the pressure that had begun to build on Solskjaer.

Andreas Pereira flashed a shot wide and Krul saved from Rashford before his save-of-the season on 20 minutes when he clawed the ball away to keep out Martial after a flick on from a corner.

However, he could do nothing to stop McTominay netting soon after. As the ball was kept alive in the Norwich box, our midfielder reacted ahead of Cantwell to a bouncing ball and swivelled then blasted it into the bottom corner to open the scoring.
Krul saved the pen and Rashford made it 2-0, before Norwich had a flurry of openings at the other end. De Gea tipped over Cantwell's drive from distance before top scorer Teemu Pukki found himself through only for Aaron Wan - Bissaka to slide in and thwart him. Emiliano Buendia fired into the side netting on the stroke of half-time.

Krul was on hand again to deny Martial, after he was played through by James, and Rashford headed over with the Reds variety and speed of attack proving too much for Daniel Farke's relegation threatened side.


The third goal came not long after, again courtesy of our direct and lightning fast attack. United launched a raid with devastating effect, once Ashley Young won the ball, and Rashford’s neat backheel presented Martial with a tight angle to score from. He duly obliged as he dinked the ball over Krul to put the result beyond any lingering doubt.

The hosts afternoon went fron bad to worse when Ibrahim Amadou was forced off through injury with Farke having already used all three of his substitutes. They were given something to cheer when Hernandez grabbed a consolation, but still United continued to press and almost made it 4-1 when sub Mason Greenwood was kept out by the legs of Krul.

Overall team performance: 6/10
United Faithful Man of the Match: Scott McTominay. Growing as a player by the week and continues to come of age

Posted by United Faithful at 01:24