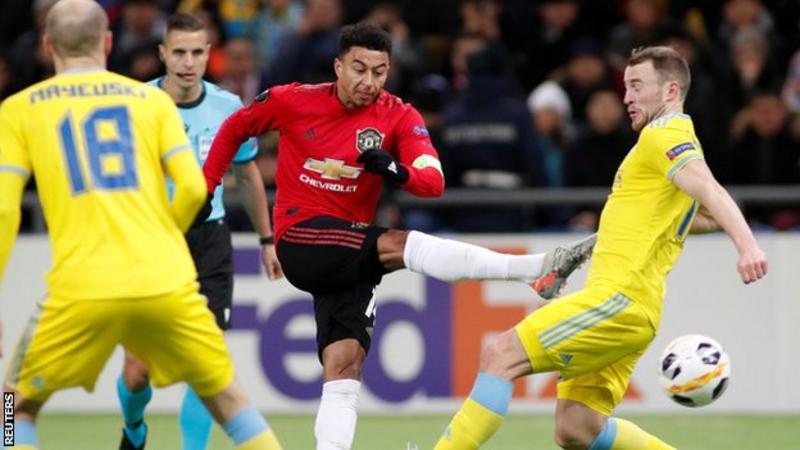 Ole Gunnar Solskjaer's youthful United side slipped to defeat in Kazakhstan on Europa League Matchday Five.
The Reds had already qualified for the knockout stages and Solskjaer left all of the senior squad at home in preparation for Sunday's tie at home to Villa. Coaches Michael Carrick and Kieron McKenna also remained in Manchester with the important Premier League tie looming.
He took a squad packed with academy graduates and chose an XI with an average age of just over 20 - the youngest ever fielded in European competition.

Captain for the night Jesse Lingard gave United the lead before already eliminated Astana turned the game on its head with two goals in seven minutes. Tahith Chong should have made it 2-0 after the break but somehow blazed over the bar from four yards. Seconds later, United conceded our first goal of the group stage when Dmitriy Shomko fired beyond debutant Lee Grant.
Another Reds debutant Di'shon Bernard then inadvertently turned the ball beyond his 36-year-old stopper to complete the turnaround.

Ethan Laird and Dylan Levitt stood out as the pick of the Reds youth with the two teenage debutants showing why they are so highly regarded at Old Trafford, impressive throughout.
Astana keeper Eric produced two top stops to keep out Angel Gomes and Mason Greenwood, but we failed to prevent the Kazakh champions from picking up a first win of the season. United only need a draw on Matchday Six to progress as group winners having already confirmed our spot in the last 32.

The match was played on a 4G pitch in the country's capital and under the roof of the Astana Arena, to protect the player from temperatures as low as -15. Despite the arduous 6,000 mile journey, United were impressively backed by over 1,000 fans to have made the trek from Manchester.
Lingard - by far the most experienced outfield player on the pitch - scored his first goal since January and aside from that he twice went close from distance with a shot wide and another that flashed over the bar.
Astana improved markedly after the break but Chong will rue not putting the result surely beyond doubt with one of the misses of the season. That seemed to spark the hosts into life and they quickly equalised through Dmitriy Shomko before Bernard's unfortunate intervention.

United enjoyed our best spell of the tie having gone behind, with Gomes stunning set piece clawed away by Eric who then stuck out an arm to deflect Greenwood's effort away.

It's hard to be too critical of the United youngsters and no doubt they will learn a lot from this experience.
Overall team performance: 6/10
United Faithful Man of the Match: Dylan Levitt
Posted by United Faithful at 01:13