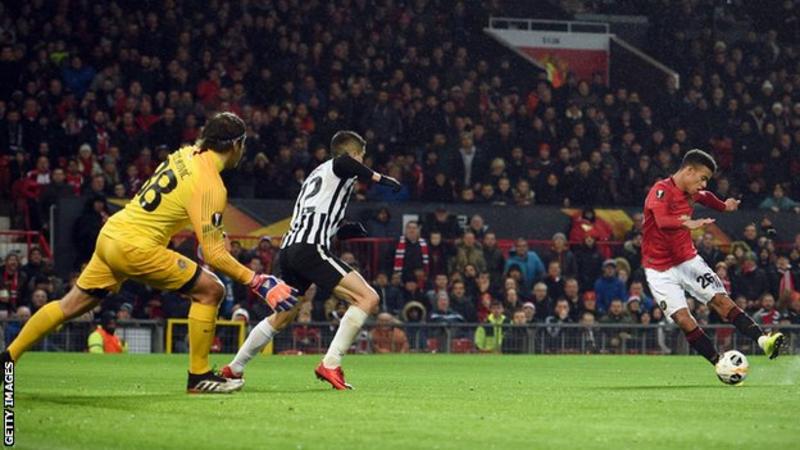 Man Utd turned in our best showing of the season to ease into the Europa Cup knockouts with two games to spare.
The result keeps Ole Gunnar Solskjaer's men top of Group L on ten points from four games, with United the only side in the tournament yet to concede a goal. Victory in their final match against AZ Alkmaar on 12 December will ensure a top seeding in the last 32, no matter what happens when they go to Kazakhstan to play Astana in three weeks.
This was a rare evening of comfort, with a goal glut at Old Trafford that could and probably should have seen the Reds run out even more convincing winners than the eventual 3-0 scoreline.

The Reds young, lively and impressive front three with an average age of only 21 between them proved too hot for the Serbians to handle. Mason Greenwood, Anthony Martial and Marcus Rashford all got in on the act either side of half time on a night when United were totally dominant and nothing less than deserving victors.

Both sides had efforts chalked out in the opening exchanges. Martial - who grabbed the winner in the return fixture - latched on to Rashford's reverse pass and stuck the ball away only to correctly be flagged offside.

Within a minute at the other end, his opposite no.9, Umar Sadiq’s shot was deflect over Sergio Romero by Marcos Rojo but he, too, was offside.
Rashford flashed a shot wide and went close again with a volley from Aaron Wan - Bissaka's cross, but Solskjaer and his side did not have to wait long for the breakthrough to come.
Rashford's defence-splitting pass found Greenwood and the 18 year old cut inside his marker before he fired the ball beyond the wrong-footed Vladimir Stojkovic to put United ahead.

Third placed Partizan were not put off by the setback and showed more adventure that ended with Seydouba Soumah curling a counter-attack shot wide four minutes later.
Fred was narrowly off target from distance but then came a moment of magic from Martial. Collecting a deflected clearance off Greenwood, our no.9 jinked his way past a posse of Partizan players, nutmegged another and slotted home from close range past the advancing keeper.


The lively centre-forward could have made it two in a minute but followed up his clinical execution with a slightly off target chip over the bar as keeper Stojkovic advanced.
There was no letting up from an increasingly confident United as we came steaming out of the traps for the second half. Four minutes after the interval, Juan Mata sent a long accurate cross-field pass to Ashley Young.

The skipper cushioned his lay-off for Rashford to stick a belting drive high into the net for 3-0. Young then almost added a goal to his assist but saw his free-kick curl just wide as the Reds looked to grab a hatful with the Serbs wilting.
The overworked Stojkovic tipped over a Fred free-kick and the Brazilian was then replaced by 18 year old James Garner for his Old Trafford debut. The only negative was an injury to Scott McTominay as he limped off 15 minutes from the end.

Another clean sheet for Sergio Romero with United yet to concede in Europe on our way to the last 32.

Posted by United Faithful at 16:12