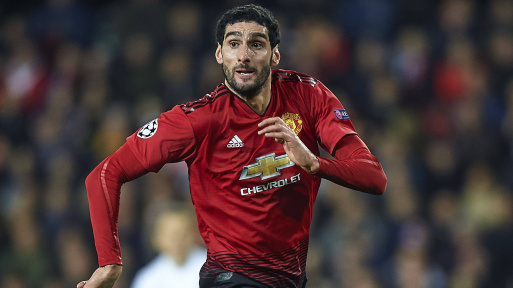 In a post on Twitter, the 32 year old - now playing for Shandong Luneng in China - wrote: "Dear friends I have been tested for coronavirus and my test result is positive. Thanks to the fans, medical staff and the club for their care and attention. I will follow the treatment and hope to return to the game as soon as possible. Please, everyone, stay safe."

Chinese media reports claim Fellaini is in isolation at Jinan hospital, which specialises in infectious illnesses and diseases. I don't think we'll have any problems with him *passing it on* though (badum tish) - sorry Marouane. We couldn't resist that.
The Belgian international moved to China in 2019 after eleven years in the Premier League under David Moyes at Everton and at Old Trafford with Moyes, LVG and Jose Mourinho as managers.
Chinese football - as with the sporting world as a whole - has been hit hard by the outbreak - with the resumption of Chinese Super League pushed back indefinitely from its intended restart of 22 February.

He is reportedly the only top flight player to have returned a positive coronavirus test in the country where this all started. Fellaini showed no symptoms of Covid 19 and was tested as he returned to training. Spain based China international Wu Lei is recovering from the condition.

Fellaini played 106 times for United having arrived from Goodison Park in 2014, but he fell out of favour under Ole Gunnar Solskjaer and moved to Shandong Luneng last January.

These are scary and unprecedented times for everyone and we hope Fellaini - as well as anyone who has tested positive or those showing even mild symptoms - stays safe and follows the guidelines of their Government.

Celebrities and athletes in the UK are being tested for coronavirus but the average Joe will just be told to self isolate and stay at home regardless of their circumstances. Being a relatively young professional sportsman, it is almost certain that Fellaini will make a full recovery.

We wish Fellaini all the best in his quarantined recovery and hope he will be able to return to the sport soon. Best wishes to him from everyone here at United Faithful.
Posted by United Faithful at 08:43

Email ThisBlogThis!Share to TwitterShare to FacebookShare to Pinterest
Labels: . news