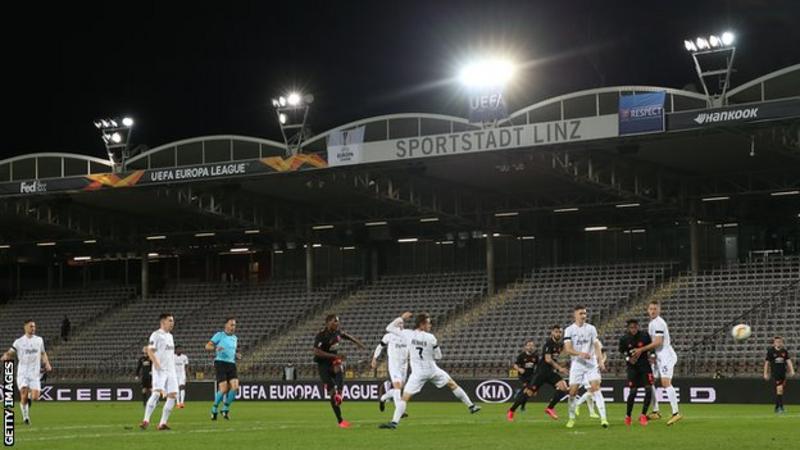 Manchester United took total control of our Europa League last 16 tie with a resounding first leg win at the Austrian champions in front of 500 people.

The game had been ordered to be played behind closed doors by the Austrian government amid the threat of the coronavirus, with a small posse of club officials, media and Austrian hierarchy in attendance in an otherwise empty ground - our team's first ever experience of playing behind closed doors.
Odion Ighalo set United on their way with a superb opening goal - his fourth in three starts - as the Reds extended our unbeaten run to an eleventh game.

Daniel James added an excellent second after half-time for his first goal since August, and Ole Gunnar Solskjaer's side put further distance between themselves and LASK through goals from Juan Mata and substitutes Mason Greenwood and Andreas Pereira.

It rendered the second leg (if there is one) at Old Trafford completely anodyne with the tie won, allowing Solskjaer to field a side exclusively of youth players if he feels the need.
Despite shuffling his pack again, with five changes from the derby, Solskjaer's men were fluid and confident against opponents on their best ever European run.

Mata miscued a chance early on and LASK keeper Alexander Schlager punched clear under pressure from a Luke Shaw cross, but he could only direct the ball to the Spaniard, but he could again only drive wide.
Schlager saved well from Ighalo, James was denied by the increasingly busy keeper and Eric Bailly directed a header narrowly off target from the resultant corner. United had piled on the pressure and persistence paid off with Ighalo's stunning breaking of the deadlock shortly before the half hour mark.

A lovely forward run from the again impressive Bruno Fernandes led to him finding Ighalo on the edge of the area. After a trio of wonderful touches with both feet to control the ball, the Nigerian slammed home a superb half-volley off the bar.
LASK suddenly sprung forward when a deflected cross fell to Dominik Frieser. The Austrian side's top scorer chanced his arm from close range but Bailly blocked well in front of Romero to snuff out the opening.

Maguire went close with a trademark header from a Fernandes corner but the second goal was not long in coming.
After Mata had fired over and Scott McTominay was denied by Schlager, James - played in by Ighalo - cut inside to slam home on 58 minutes to end his 23 game goal drought. It was his first goal since the 31 August and capped a creditable recent revival for the player.
Ighalo struck a post and Peter Michorl had an effort at the other end, but the Reds remained in control and put unassailable distance between us and Valerien Ismael's tiring Austrian champions late on.

After collecting the ball on the touchline, Mata found Fred whom played a pinpoint, defence-splitting
pass back to the Spaniard and, one on one with Schlager, he finished emphatically.
Substitutes Tahith Chong and Greenwood linked up for the fourth goal, as the former found the latter to fire in an excellent finish off both posts.
Another sub, Pereira, added the icing on the cake with a 25-yarder that Schlager should have done better with.

The Reds now head back to OT with a 5-0 lead and both feet in the quarter finals, ahead of the scheduled game against Tottenham on Sunday (although that will almost certainly be postponed).