Ole Gunnar Solskjaer's side returned to action for the first time in 103 days as a late Bruno Fernandes penalty earned the Reds a deserved point at an eerily deserted Tottenham Hotspur Stadium.
Paul Pogba made his first appearance since Boxing Day and swung the game in United's favour, finally carving open Spurs resolute rearguard as former manager Jose Mourinho threatened to get one over his former side with a classic spoiling performance.

The Reds first game at Spurs new ground should have been witnessed by a 62,000 crowd but the players had to be content with a fan wall projected around the ground with the game played behind closed doors. 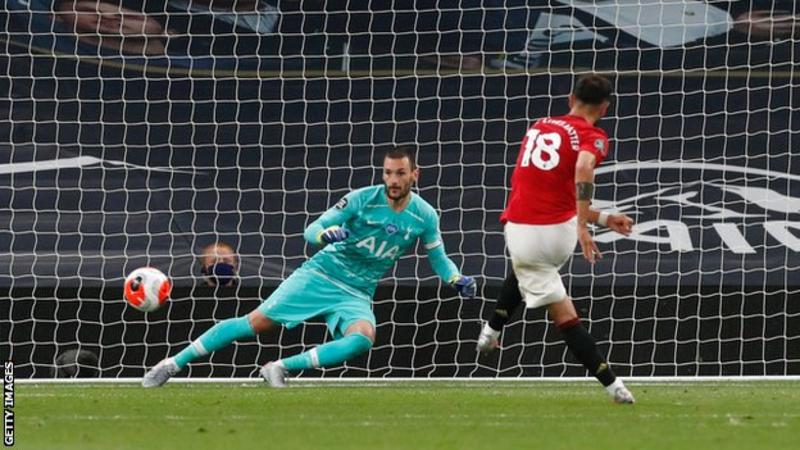 Pogba won the late penalty from which Fernandes scored his fourth goal for the club, with a draw a fair result for a United side that started strongly and finished with a flourish.
The Reds had been on a roll before the lockdown, stringing together an eleven-match unbeaten run to move to within touching distance of the top four, keeping Mourinho's injury-hit Spurs at arm's length as we attempt to chase down Chelsea in the protracted battle for a coveted Champions League place.
Mourinho was able to welcome back Harry Kane and Heung-min Son whilst top scorer Marcus Rashford came straight back in fresh from his victory over the UK Government this week.

Understandably, the Reds were rusty and played in patches but dominated the second half and showed character to dig themselves out of a hole. Although Fernandes was quiet, that was partly down to Mourinho's vintage tactics and he still managed to make enough of a difference in a game in which defeat would have been harsh.

The Reds began brightly and went close inside five minutes, when Rashford's half volley was well saved by Hugo Lloris. The Frenchman was going the other way but managed to deflect the ball away with his foot, before he did well to deny Fernandes after he tried his luck from distance. Fred also had a go with a more routine effort, but despite United's strong start, Spurs drew first blood when they went ahead with their first attack of the game.
Steven Bergwijn's goal - his third in six games since arriving for PSV - came just before the half hour. Lloris thumped the ball downfield, Luke Shaw and Rashford failed to get hold of it and Bergwijn burst clear. Skipping beyond Harry Maguire and Fred, he fired in a finish that looked a good height for David de Gea but the ball went through him, a goal for which a keeper of De Gea's quality definitely should have done better.

To his credit though, De Gea redeemed himself with a superb save moments later. Turning creator this time, Bergwijn picked out Son and the Korean's header looked destined for goal but De Gea brilliantly tipped the ball over the bar to keep United in touch. 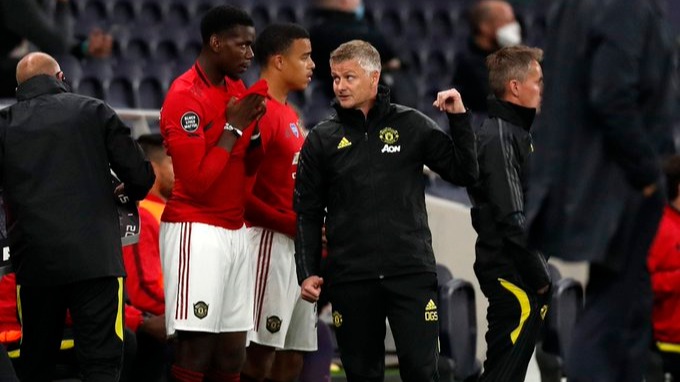 Fred flashed wide from a free-kick and Bruno was off target with a 30-yarder but the pattern for the second half was already set.

Mourinho turned to his raison d'etre and dropped all of his men behind the ball in a bid to defend his side's slender lead. Fernandes looked to have Lloris finally beaten but his ambitious daisy cutter flashed inches wide of the far post with the keeper stretching.
One of the major talking points ahead of United's return to action centred around Pogba's comeback. Having missed six months with an ankle injury, United's World Cup winner was summoned from the bench on 62 minutes with the Reds in need of added creativity to break down Spurs.

It was another Frenchman, or rather Frenchmen, in the action soon after though. Anthony Martial had been on the periphery all night but sprung into life when played through by Rashford. Lloris pulled off the best save of the night, however, denying his compatriot with a superb stop to push the ball over the bar and to safety. Still the Reds continued to press as Tottenham found themselves a side under siege.

Martial was thwarted by a superb lunging challenge from Eric Dier, but he would later turn from hero to villain when Pogba's neat footwork saw him clumsily hauled down by the struggling Spurs centre back. Fernandes made no mistake for his fourth goal for the club, and United then thought they had another spot kick when referee Jonathan Moss adjudged Dier to have erred again, this time on Rashford.
Replays showed there was minimal contact and VAR correctly overturned the call, but United still could have won it right at the death when substitute Mason Greenwood's angled effort flashed across goal in the final seconds.

Overall team performance: 6/10. We did well considering the circumstances
United Faithful Man of the Match: Paul Pogba. Changed the game and his 60-yard missile to Rashford was simply madness.
Posted by United Faithful at 16:20