A Bruno Fernandes inspired Manchester United left Brighton feeling blue with a sensational display of attacking football on the south coast.
United, under the tutelage of Jose Mourinho, had suffered successive and shambolic back-to-back defeats at the Seagulls' Amex Stadium home, but were completely dominant here to continue our winning run and move back to within two points of place-above Chelsea. 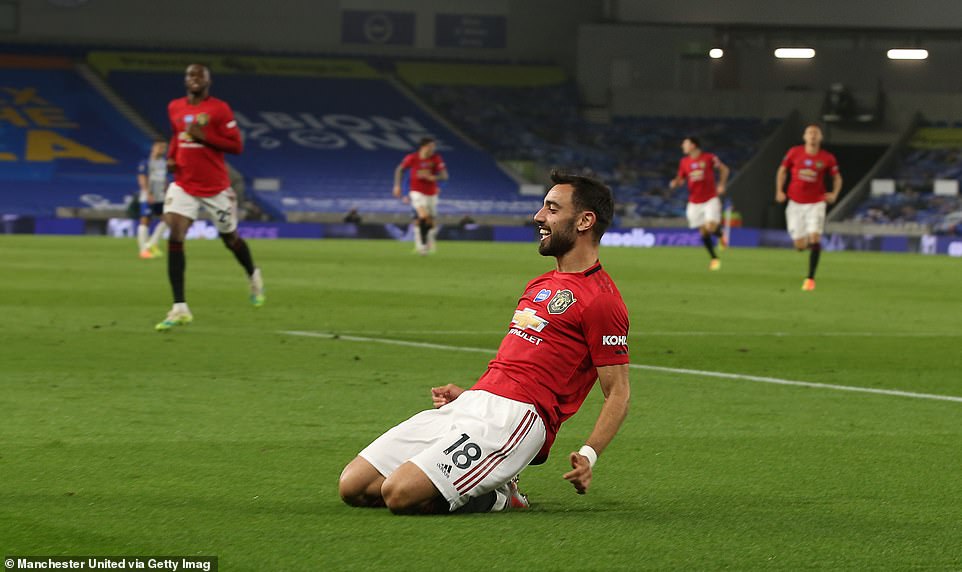 Having made eight changes at Norwich in the FA Cup, Ole Gunnar Solskjaer restored the Reds might attacking tridents as Paul Pogba and Fernandes started together for only the second time.
The Reds Portuguese magnifico was exactly that - scoring twice with a shot from distance and then at the culmination of a stunning counter-attack goal reminiscent of the halycon days of yesteryear.
In a team performance that was stylish and at times scintillating, Fernandes was again the conductor of the the orchestra, leading the charge and b
ending Brighton to his will.


Having waited seven years for a league hat-trick - a drought ended by Anthony Martial against Sheffield United last time out - United could have had two in as many games had Fernandes found the net instead of the post with the game goalless.

The victory at the Amex is a long overdue one and means the team are now fifteen unbeaten in all competitions, including three wins and a draw since the resumption after the coronavirus lockdown.

United were on the front foot from the off and came close in the 13th minute through Fernandes. Harry Maguire found Aaron Wan-Bissaka, he in turn moved the ball on to Pogba and Fernandes slammed the ball against the upright with Brighton keeper Mat Ryan beaten.

Marcus Rashford had a penalty appeal turned down but Brighton simply couldn't deal with United's poise, precision and pace and the inevitable breakthrough was not long in coming.
Maguire again started the move, finding Wan - Bissaka and he moved the ball on Mason Greenwood. The 18-year-old burst in the box, skipped past the stranded Lewis Dunk and fired in finish at the near post - a goal reminiscent of Robin van Persie and the generational talent's 13th goal of an impressive debut season.

Fernandes flashed a shot over the bar but United were in irresistible mood and moved 2-0 ahead shortly before the half hour mark. Luke Shaw's run and cross down the left picked out Pogba, he moved it on to his partner in crime and Fernandes slammed home from the edge of the area for his sixth goal since joining in January.

Five minutes into the second half, Fernandes had another and this one was a goal of the season contender. It came at the culmination of a stunning team move, as Maguire's clearance found the in-form Nemanja Matic and he moved the ball on with a sizzling reverse volley to Greenwood.
The teenager stormed clear down the right, left Martin Montoya and Lewis Dunk trailing in his wake and turned provider for Fernandes with a chipped pass that was met on the volley by the onrushing Portuguese, slamming home a wonderful volley to complete a move that will live long in the memory. It was a goal that United's 2008 vintage would have been proud of.

Brighton, to their credit, continued to cause problems, mainly through the lively half time substitute Leandro Trossard. He fired wide and then headed over, before Ole - with Saturday's visit of Bournemouth in mind - took off Pogba and Fernandes with Scott McTominay and Andreas Pereira getting some minutes in their legs.

Having been a virtual spectator all night, David de Gea kept his concentration throughout and was called into action on 68 minutes. Aaron Connolly sent in a shot, but De Gea was equal to his dipping effort and pushed it over the bar, also denying Neil Maupay with another superb save moments later.

McTominay and fellow substitute Dan James went close to a fourth goal with both being kept out by Ryan, but - clinical and ruthless - the Reds cruised to a vital victory to stay firmly in the hunt for Champions League qualification.