Manchester United moved into the top three after Mason Greenwood cancelled out Michail Antonio's opener after a moment of madness from Paul Pogba. 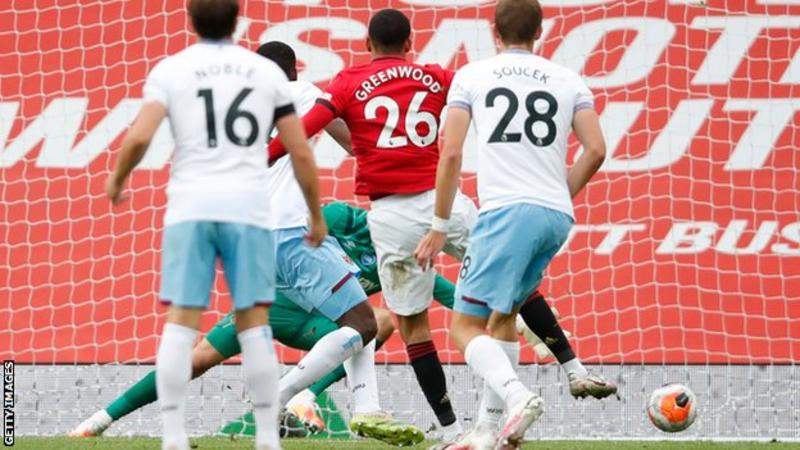 The Reds face Leicester in a final day shootout for Champions League qualification against Brendan Rodgers men, and only need a draw to make certain of their place at Europe's top table next season.

This was a display in keeping with United's below par performances in recent weeks, despite Ole Gunnar Solskjaer restoring several of his big guns after resting the likes of Anthony Martial, Pogba and Greenwood at Wembley.
West Ham needed a point to rubber stamp their survival with David Moyes setting up his in-form side to make life hard against his former employers. Nonetheless, United made a fast start to the game and quickly called Hammers stopper Lukasz Fabianski into action, with two efforts in quick succession from Martial and Greenwood.

Bruno Fernandes was unusually off colour and his frustration was clear after he uncharacteristically mis-controlled a Marcus Rashford through pass when well placed. Martial flashed a strike over the bar  but the well-drilled visitors weathered the early storm, slowly growing into the game as they began to cause United problems.
Angelo Ogbonna headed wide but Rashford, lurking on the periphery throughout, then burst into life with a 25-yarder that Fabianski did well to save. Greenwood had a shot blocked after good work by Brandon Williams, but the Hammers remained a threat when right-back Ben Johnson picked out Antonio under pressure from Victor Lindelof, only for David De Gea to thwart the onrushing forward.

Yet West Ham disappointingly took the lead out of nothing on the stroke of half-time, when a Declan Rice free-kick was blocked by the outstretched arms of Pogba. The Frenchman may have instinctively trying to protect himself, but there could be no arguments about the award of the spot-kick.
Referee Paul Tierney checked with VAR, the decision was upheld and West Ham's in form leading scorer did the rest from 12 yards.
United responded to the setback and equalised with the best move of the game. It was intricate, it was neat and it was deadly as Martial and Greenwood linked up to find a way through the Hammers watertight defence. The former found the latter to power in a trademark finish for his 17th goal of the season - the best by a teenager at United - on his 50th appearance. He is 18.

Pogba went close from distance but if West Ham expected a siege then it was not forthcoming. The under pressure De Gea saved superbly from a deflected Jarrod Bowen strike, and Rice chanced his arm from distance.
Antonio nodded wide and De Gea saved again from Pablo Fornals before United introduced Odion Ighalo in search of a winner. The substitution almost worked, too, as the Nigerian swept narrowly wide from a Williams cross almost immediately after coming on. But there was to be no late drama as West Ham locked the game down, with both sides, in the end, happy with a point.