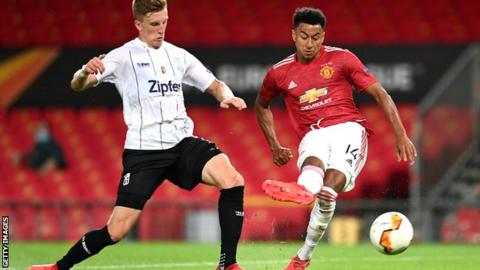 Manchester United resumed their delayed Europa League campaign with a late Anthony Martial winner to complete a 7-1 aggregate victory over LASK.
Ole Gunnar Solskjaer's side came from behind to advance to the watered-down tournament's 'Final Eight' in Germany and will play FC Copenhagen in Cologne on Monday for a place in the semi finals.
Martial came off the bench to score the winner four minutes from time, after Jesse Lingard's second in as many games had cancelled out Philipp Wiesinger's shock opener.
146 days after the Reds 5-0 victory in the Austrian town of Linz, and fresh from having secured a top three finish in the Premier League, Reds boss Solskjaer named a much stronger side than expected with the lack of young a major disappointment for the thousands of United fans watching from their living rooms.
Harry Maguire played his 59th game of a gruelling campaign, and there were also starts for Lingard, given a rare opportunity, along with Juan Mata, Fred, Daniel James and Odion Ighalo.
With the tie already won, it was perhaps understandable that United lacked tempo and urgency, with the Austrians - despite being dead and buried - sensing a chance to claim a famous, feather-in-their-cap victory at a deserted Old Trafford.
Juan Mata was thwarted early on but LASK soon seized the initiative and saw a flurry of openings fall their way. After the wonderfully named Andreas Andrade headed against the bar, the increasingly confident visitors went close twice in quick succession.
Peter Michorl flashed an effort over the bar and then Marko Raguz headed wide before Scott McTominay was snuffed out by a blocking challenge at the other end.
Ighalo fired narrowly off target but the breakthrough remained elusive at the interval.
The Reds started brightly after the restart and had their best chance of the game on 52 minutes, at the culmination of a sweepingteam move. Mata found Brandon Williams and the marauding left-back in turn picked out Fred. The Brazilian moved the ball to the overlapping left-back and his whipped cross narrowly evaded both James and the stretching Lingard.
It was LASK, rather than the Reds, who responded to that let-off with a goal. It was a strike not in keeping with its surroundings, as United failed to clear a corner and Wiesinger chanced his arm with a 25-yard rocket into the top corner - a stunning finish that left Sergio Romero with no chance.
Despite the goalscorer going close again soon afterwards, Dominik Thalhammer's hopes of a famous victory for his side did not last long. United restored parity within three minutes when Mata played in Lingard and he slipped the ball beyond Alexander Schalger for only his second goal of a disappointing season. Having also found the net at Leicester on the final day of the domestic campaign, it was Lingard's second in as many games - and the first time since December 2018 that he's score in back-to-back matches. Those came in Jose Mourinho's final tie in charge and Solskjaer's first.
Romero saved well from substitute Dominik Reiter and McTominay went close from distance before Solskjaer handed a long-awaited debut to highly-rated teenage defender Tegen Mengi. It was how the 18 year old would have dreamed it, but it was still a proud moment for Mengi - becoming the eighth Academy graduate to make his senior bow under Solskjaer in 2019-20, the most since the days of Sir Matt Busby.
Martial came on for James at the same time and there was still time for the lethal Frenchman to make an impact. Mata slipped him behind the LASK defence and Martial fired home a finish beyond the advancing keeper - who should havedone better - for his 23rd goal of the season, edging one in front of Marcus Rashford.

Victory complete and job done, and United now fly out to Germany to prepare for that quarter final tie against the Danes on Monday.
Overall team performance: 6/10
United Faithful Man of the Match: Jesse Lingard
Posted by United Faithful at 16:31
Labels: ., match reports