Fernandes 95th minute spot-kick, awarded after Anthony Martial was scythed down, sent United into a third cup semi final of the season with the team looking to reach a first showpiece under Ole Gunnar Solskjaer. 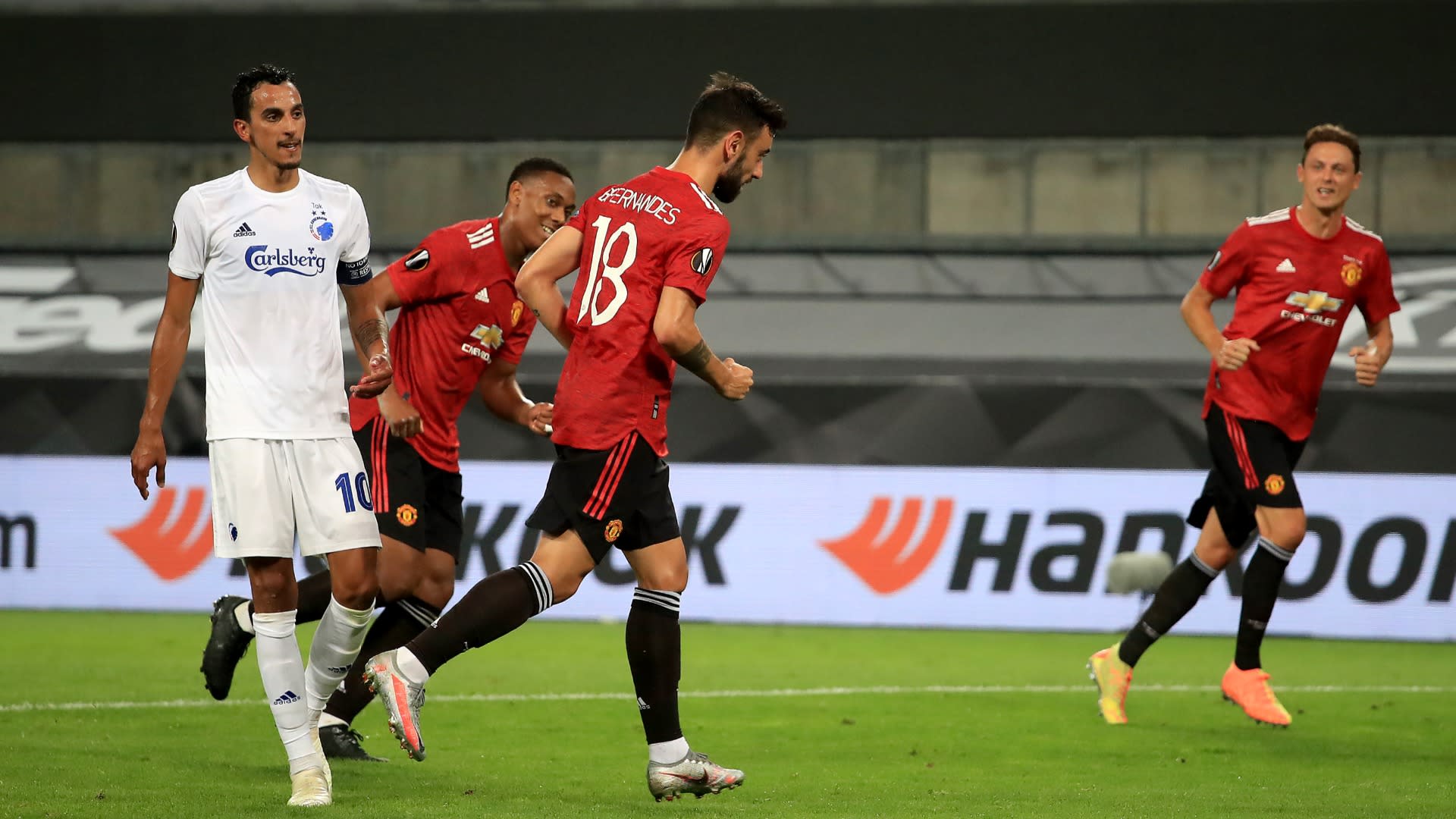 The Reds had dominated for long periods on a sweltering night in Cologne, but were repeatedly denied by a combination of the woodwork and the heroics of the Danish side's keeper Karl - Johan Johansson.

The Copenhagen custodian enjoyed the game of his career, stopping the Reds almost single handedly and proving equal to everything thrown at him. In total, Johansson made 13 saves on the night, the joint most by a goalkeeper in a single Europa League match since the competition's rebranding in 2009-10.

It was the rank Danish outsiders whom began strongly with three chances in the opening 17 minutes.

Eric Bailly blocked from the impressive Mohammed Damary when well-placed, before Brandon Williams vital goal saving header from a Rasmus Falk corner denied the capital club a shock lead. The lively Daramy got in again after Fred had lost possession 30 yards out, but Maguire blocked the initial effort before Paul Pogba was on hand to thwart Jonas Wind.

That early storm blew itself out, though, and United gained a foothold after the first drinks break. Fernandes headed against the bar, and Fred narrowly failed to find Marcus Rashford where a little more accuracy would have put the England man clean through.
Daramy was causing most of the problems and came close again on 37 minutes when a cross picked him out from close range, only for the excellent Bailly to get in ahead of the 18 year old and clear the danger.

Former Red Guillermo Varela was fortunate to escape censure having bundled Martial over, and the Frenchman then couldn't get his shot away after a good ball from Aaron Wan - Bissaka.

Rashford stung the palms of Johansson before United thought they had gone ahead on the stroke of half time, only to see Mason Greenwood's wonderful off-the-post finish correctly chalked out for offside.

The Reds were now applying constant pressure to the Copenhagen goal and had another effort disallowed shortly after the restart. Greenwood thumped the post for a second time and Rashford snaffled up the rebound, only for the linesman's flag to come to the Danish side's rescue again.

Fernandes was denied by the post and Rashford was twice kept out by Johansson, whilst Wind had Copenhagen's best opening, only for him to fire wastefully wide when well-placed.

Former Everton man Bryan Oviedo had a glorious chance to score, denied by by a superb Wan - Bissaka tackle, whilst Johansson continued to defy the Reds with a performance that was quickly becoming a clinic.

He tipped wide from Fernandes 25-yarder and then came to his side's aid again with a spectacular stop to claw away a dipping effort from a similar distance, this time to thwart Martial.

Martial had come alive and almost won it at the death when he weaved through the Copenhagen defence and burst clear, only for Victor Nelsson to save the day with a superb inch-perfect challenge at the vital moment.

It seemed incredible how the tie had remained goalless, with extra-time now needed to separate the two tiring teams. Juan Mata replaced Greenwood for the start of the additional 30 and it proved a masterstroke, with the Spaniard's cameo a throwback to his peak of 2011. His link with Martial would make the decisive difference, as he first played United's no.9 through on goal only for - you guessed it - Johansson to save again.

The Frenchman continued his personal duel with the Copenhagen keeper, this time kept out by the legs of Johansson, but the heroic stopper would finally be beaten on 95 minutes.

Mata spun in the box and picked out Martial who was clumsily fouled by former Brentford player Andreas Bjelland. Fernandes made no mistake as he converted the spot-kick in familiar fashion to give the Reds a lead that had been so long in coming.

Martial returned the favour to Mata with a sublime back-heel but his resultant shot was blocked and the 32-year-old then flashed another effort over the top as United looked to put the tie beyond reach.

The fact they did not do so was down to that man Johansson, in inspired form again to save from Fernandes and then somehow keep out Mata's follow up with a remarkable reflex stop. Victor Lindelof struck the post on the rebound and Martial was crowded out having danced through the Danes in the closing minutes.

There were to be no nervy moments as the Reds held firm and seal a place in the last four, where we will face either divisional rivals Wolves or old nemesis Sevilla on Sunday.

Posted by United Faithful at 02:35