Bruno Fernandes struck the winning penalty in the 100th minute of an extraordinary thriller at the Amex Stadium to give United their first league win of the season.

For so long second best, Ole Gunnar Solskjaer's side had recovered from Neil Maupay's penalty to lead through Harry Maguire and a stunning Marcus Rashford effort. Solly March looked to have pilfered a deserved point for Brighton with a 95th minute equaliser after the hosts had rattled the woodwork on five occasions.

But there was to be even later drama when Maguire's header from a Fernandes corner was clearly handled by hero-turned-villain Maupay, and the Portuguese did the business from the spot to give United an improbable victory. 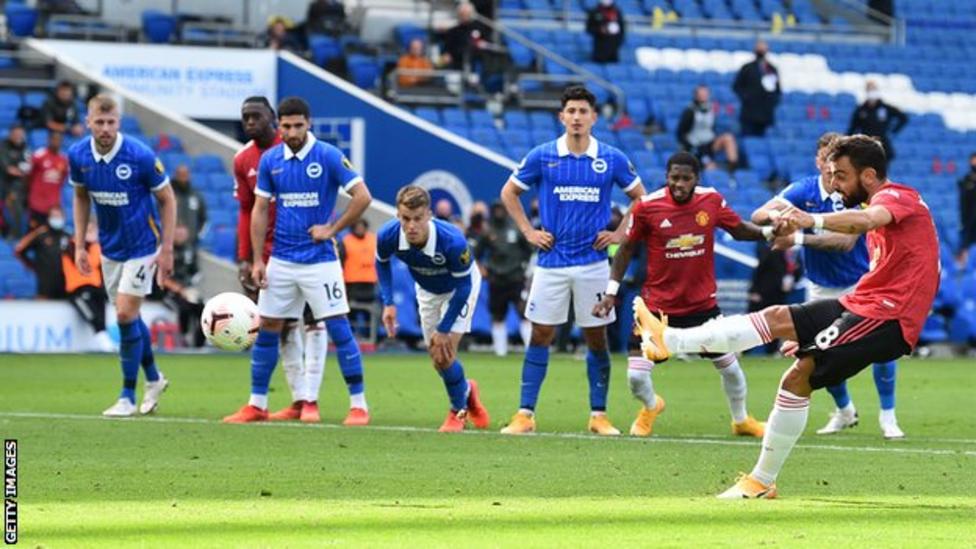 Graham Potter's vibrant Seagulls can feel hard done by, as they were the better side for long periods and proved more than a match for a United side still someway short of full fitness.

The hosts started strongly and went close twice through Leandro Trossard early on. He struck David de Gea's right hand post in the ninth minute and then, 12 minutes further on, thumped the other upright from distance with De Gea beaten.

Lewis Dunk looped a header over the bar before the Reds suddenly roared into life and thought they had gone ahead through Mason Greenwood. A trademark United counter-attack involved Luke Shaw, Anthony Martial, Rashford and Greenwood, whom rifled in beyond Mat Ryan. Rashford had strayed marginally offside though and the goal was correctly chalked out.

Having conceded a penalty last week against Palace, United erred again when the clumsy Bruno Fernandes scythed down the rampaging Tariq Lamptey and Maupay's panenka sent De Gea the wrong way. But the Reds would only trail for 194 seconds when a Fernandes free-kick was flicked on by Nemanja Matic and turned in by Dunk under pressure from Maguire.

Rashford had a goal ruled out and Brighton though they had another penalty when Aaron Connolly went down, only for VAR to rule that contact had been initiated by the Brighton man.
Soon after, United had turned the tie on its head when Rashford spun on to beautiful through pass from Fernandes, twice dummying Ben White, nutmegging Adam Webster to place the ball beyond the advancing Ryan.

If the Reds through that would clip the wings of the Seagulls, they were to be mistaken. In fact, it only seemed to spur on Potter's side to greater extent. March was denied by a post and the woodwork rescued United for a fourth time when Trossard smashed off the bar at the culmination of a sweeping move.

De Gea saved superbly from Trossard and then March again, before the latter struck in the fifth minute of added time after substitute Alireza Jahanbakhsh had picked him out. The goal, the celebrations and the subsequent aftermath meant added time to added time and United took full advantage. Late substitute Donny van de Beek won a corner, and Maguire's header struck the hand of Maupay. The final whistle blew immediately after the incident, but with the ball still in play, referee Chris Kavanagh checked the monitor and had no option but to award the spot-kick. Fernandes fired the penalty high beyond Ryan to give the Reds a nail-biting, harum scarum victory in the most remarkable of finishes.