Ole Gunnar Solskjaer's side have made light work of a daunting group so far with two wins from two and will qualify for the last 16 if we beat Istanbul Basaksehir in next month's double header. 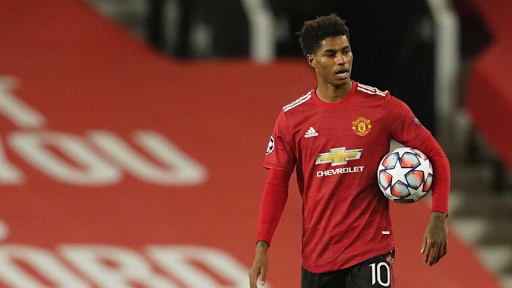 Mason Greenwood had put the Reds ahead with his first goal in the competition before Rashford - fresh from another triumphant week off the field - took centre-stage.

First, he ran clear to slot in from close range after fellow sub Bruno Fernandes had split the defence, then thumped in a wonderful solo second from close range before Rashford drilled in a drive in the final minute.
Anthony Martial's penalty for his first goal of the season completed an impressive rout against Julian Nagelsmann's league leaders and last season's semi finalists.

Solskjaer shuffled his pack and reverted to a diamond but still named a strong side with Greenwood recalled to partner Martial in attack. Paul Pogba and Nemanja Matic came back in whilst Donny van Beek - subject of much discussion - started at the tip of a 4-1-2-1-2 system. Perhaps with Sunday's league game with Arsenal in mind, Rashford, Fernandes and Edinson Cavani were on the bench.

Following on from last week's tremendous showing against the might of PSG, the Reds - back at Old Trafford - set the tone from the off and it took us only 21 minutes to go ahead. Fred had a shot saved by former Hull keeper Peter Gulacsi, but the veteran stopper was unable to prevent a trademark finish from Greenwood six minutes later.
Pogba's pinpont pass found the young striker and he made no mistake from close range with a trademark low finish into the corner. It looked as though Greenwood might've been marginally offside, but - the obligatory VAR check later - the goal stood.

David de Gea was called into action almost immediately when he saved well to keep out Christopher Nkunku but the Reds, well marshalled by Harry Maguire and company, kept the dangerous energy drink attack at bay.
At the other end, the highly-ranked Dayot Upamecano, linked with United regularly, showed his class with a composed and commanding showing and looked good on the ball when playing out from the back.

United began the second half as they had started the first and had a penalty shout waved away on 51 minutes when Ibrahima Konate looked to have fallen on the ball, only for the referee to judge the offence accidental with Konate's arm in a natural position. 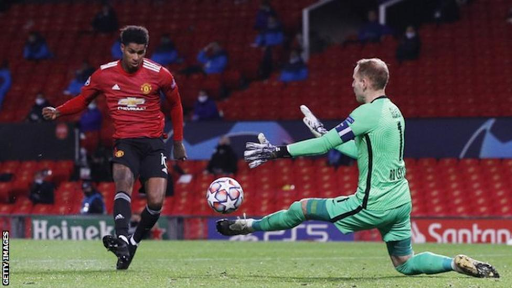 Leipzig began to turn the screw and twice went close in quick succession through Konate, who was thwarted by De Gea, and then Emil Forsberg flashed a shot wide after Dani Olmo had picked him out.

Martial was unable to turn home a clever clipped free-kick from sub Fernandes, with the Portuguese playmaker having replaced van de Beek.
Fernandes impact was stunning and he was at the heart of things again in the 74th minute as his sweeping ball forward found the onrushing Rashford to race on to the ball and fire beyond the advancing Gulacsi.
The striker was initially flagged offside, but replays showed he was in his own half, the linesman had made an error and VAR awarded the goal.

Now with vital breathing space, the Reds set about putting their wilting opponents to the sword. Two minutes on, Rashford had his third as he slammed in a low drive and then Martial converted the spot-kick having been scythed down by Marcel Sabitzer.
Cavani had the ball in the net but was flagged offside, setting the stage for the Rashford show as the local lad, MBE and King of Manchester completed his first senior hat-trick in stoppage time. Martial cut the ball back and Rashford thumped beyond Gulacsi to take home the match ball and complete a devastating rout.

United face Arsenal on Sunday before we travel to Istanbul next Wednesday.