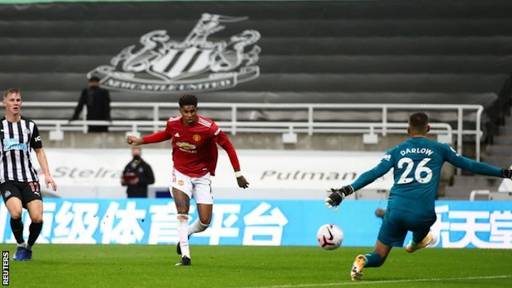 Manchester United turned on the style to overpower Newcastle in the last ten minutes as Ole Gunnar Solskjaer's men emphatically answered their critics.

A deflected Luke Shaw own goal looked to have deepened United's woes after only two minutes, but Harry Maguire - subject of plenty of recent criticism - headed the Reds level. Bruno Fernandes had his first failure from the spot but it was he whom put us ahead at the culmination of a stunning team move late on.

There was even still time for Aaron Wan - Bissaka to hit his first senior goal and Marcus Rashford to run in the fourth as the Reds responded perfectly from the Spurs debacle.
The result and performance was by far our best of the season as United climbed to 14th in the youthful league table with six points from four games - albeit with a match in hand on everyone else.

United started in the worst possible fashion after only two minutes when Emil Krafth's cross took a hefty deflection off Shaw and looped in over the stranded David de Gea.
Fernandes had a goal correctly ruled out for offside against Mata in the build up, before the pair - at the heart of everything we did - linked up again for the leveller. Fernandes picked out Mata and his shot was tipped behind by Karl Darlow, and Maguire powered home a header from the diminutive Spaniard's resultant corner to restore parity. Maguire, a man in the spotlight after his recent poor form and sending off for England, badly needed a change of luck and this will do his confidence the world of good.

De Gea saved superbly from the lively Allan Saint - Maximin shortly before the interval and Rashford flashed a shot wide but the two Uniteds went in at half-time level.

Newcastle remained a threat and looked almost certain to have gone ahead early on in the second half, just as they did at the start of the game. Jeff Hendrick got to the byline and cut the ball back for fellow summer signing, Callum Wilson, only for De Gea to pull off a save of the highest quality from point blank range.

Rashford was scythed down by a lunging challenge from Jamal Lewis, and, after the obligatory VAR check, referee Craig Pawson awarded United a penalty.
Fernandes - usually impeccable from 12 yards - saw his eleventh Reds spot-kick pawed out by Darlow and Maguire then had a header cleared off the line by Jamaal Lascelles from the resultant corner.

But the Reds encouragingly did not let their heads dropped, as against Spurs, and instead United stepped up the pressure with Paul Pogba and van de Beek brought on in search of the crucial winner. Van de Beek fired wide and Darlow saved from Rashford before a glorious team goal of the highest order. 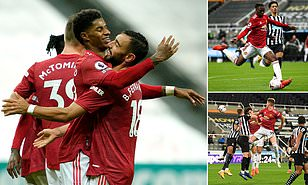 Straight from the Sir Alex Ferguson vintage, van de Beek found Mata who back-heeled to Rashford and he, in turn, burst clear and cut inside to find Fernandes. The overlapping Portuguese smashed the ball beyond Darlow and into the top corner from the tightest of angles to put the Reds ahead in wonderful style.

Wan - Bissaka had done well against Saint - Maximin on his half century of appearances and he broke his senior goal drought with another excellent finish as he thumped home from the edge of the area right on the 90.

Rashford then capped off a brilliant week and a superb individual performance when he completed the rout in the final moment. A searching through ball from Fernandes found our no.10 and he raced through to slot beyond the injured Darlow and complete a rout that few saw coming.