It was deja vu for the Reds in Paris as Marcus Rashford repeated his 2019 heroics to give United an incredible, incredible victory in our Group H opener.

Rashford slammed in a late 87th-minute winner to put the seal on a fully deserved victory, after a Bruno Fernandes penalty had been cancelled out by an Anthony Martial own goal.
Star studded PSG - last season's finalists and arguably the best side in the world - hadn't lost in the group stages at the Parc des Princes in 24 matches but Ole Gunnar Solskjaer's side turned that on its head with a vintage performance for the ages.

The United manager had enjoyed the best night of his managerial career 595 days ago, but this was a performance better than that one - instead of a highly fortunate smash and grab, United were controlled, dominant and energetic this time around.

Solskjaer made three changes from the side that won 4-1 at Newcastle last time out, with a debut for Alex Telles, Luke Shaw moved into a back three, a first start in ten months for Axel Tuanzebe and Martial - serving a three-game domestic suspension - restored to the attack.

Fernandes captained the side in the absence of Harry Maguire and the stand-in skipper was involved early on when he found Rashford with a reverse pass, but the ball deflected off Abdou Diallo and into the arms of Keylor Navas.

David de Gea saved superbly from former Red Angel Di Maria, and the Spanish stopper was at it again shortly afterwards when he kept out a Layvin Kurzawa volley with his foot from the resultant Mbappe corner.

United broke forwards and took the lead on 23 minutes when Martial was scythed down by Diallo and a penalty was awarded. Bruno Fernandes had been denied by Karl Darlow at Newcastle and Navas pulled off a repeat performance when he repelled the usually metronomic Portuguese's spot-kick. But VAR had spotted Navas off his line, correctly ordering a retake, and Fernandes made no mistake second time around.

Navas tipped wide - again from Fernandes - and Scott McTominay went close with a header having been picked out by the impressive Telles.
De Gea was called into action to keep out Mbappe three minutes after the restart, and Kurzawa flashed an effort narrowly over as the French giants turned the screw after half-time.

That warning was followed by a major blow for the Reds moments later as Martial inexplicably headed into his own net, closing his eyes and barely jumping, to bring PSG level from nowhere.
Aaron Wan - Bissaka thwarted the dangerous Mbappe with a stunning challenge and then Martial went close at the right end with another header, after Shaw had linked well with Telles.

The Brazilian left-back enjoyed an impressive debut but was replaced by Paul Pogba with 25 minutes to play as Solskjaer went to a back four and reverted to a midfield diamond. Navas saved well from Rashford and De Gea did likewise at the other end - to deny Neymar - in an increasingly frenetic, end to end encounter. 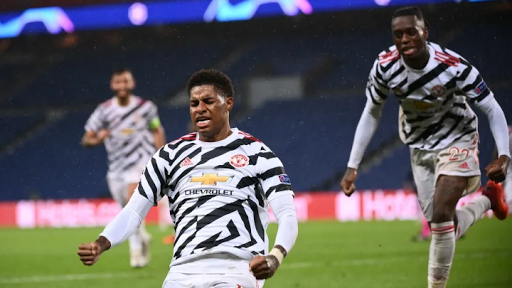 It looked as though United would be forced to settle for a point but Rashford - the man who loves Paris - showed he's not just good at feeding children. Pogba found Marcus Rashford MBE on the edge of the box, and the England man fired low beyond Navas three minutes from the end to give United a huge, against the odds victory.

In a devilishly difficult group, every point is vital for the Reds and with the visit of RB Leipzig on the horizon, it couldn't have been a better start for Solskjaer's United.

Overall team performance: 9/10
United Faithful Man of the Match: The whole team for a magnificent showing

Posted by United Faithful at 02:05