United returned to the summit of the Premier League with a club-record equalling victory at Fulham sealed by Paul Pogba's stunning second half winner. 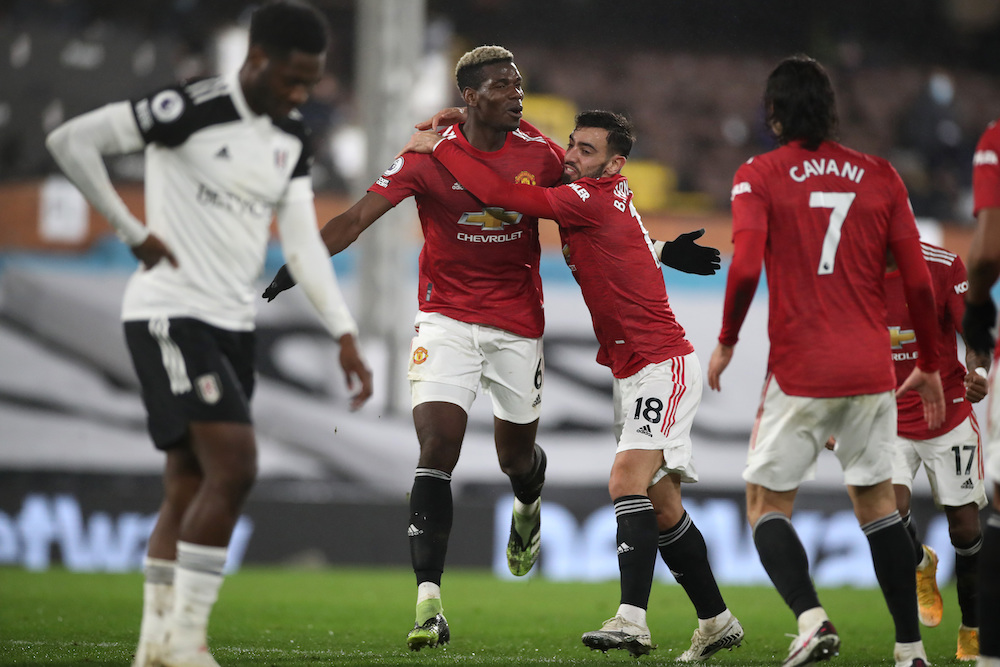 Ole Gunnar Solskjaer's side had fallen behind on the road again early on, after Ademola Lookman had given the lowly but improving Cottagers a shock fifth-minute lead.
But for the seventh time away from the confines of Old Trafford in 2020-21, United found a winning response - taking our run to 17 unbeaten on the road in the league (the third best record in the whole of Europe).
Edinson Cavani steered in a Bruno Fernandes cross, albeit with a bit of help from Alphonse Areola, before Pogba's sublime control and angled 20-yard curler completed the comeback.
The Reds had been displaced from the top of the league after Leicester had beaten Chelsea 2-0 on Tuesday, and started the game in third as Manchester City moved top for the first time this season with a win over Aston Villa by the same scoreline.

Solskjaer made three changes from the weekend draw with Liverpool as Eric Bailly, Mason Greenwood and Cavani came in for Victor Lindelof, Scott McTominay and Marcus Rashford.
Fulham, in the bottom three but with a notable upturn of late, started much the stronger on the banks of the Thames with Lookman in particular catching the eye.
David de Gea saved from the striker in the second minute, but proved powerless to prevent his second effort moments later. The forward was released by a pinpoint through pass from Frank - Zambo Anguissa before he took the ball in his stride and fired across De Gea and into the corner having been played onside by the errant Aaron Wan - Bissaka.
United then had what looked a stonewall penalty waved away when Ruben Loftus - Chee scythed down Fred in the box. but referee Martin Atkinson was unmoved and VAR failed to even request a review.

As is their wont, United exerted their authority on the game despite a slow start. Bruno Fernandes thumped against a post and Pogba flashed a shot wide, but parity was not long in coming.
Bruno, inevitably, was at the heart of it on 21 minutes as United deservedly equalised. Popping up wide on the left, Fernandes whipped the ball in and Areola failed to gather. The French keeper fatally fumbled the ball, and the lurking Cavani gleefully gobbled up the loose ball for his fifth goal of the campaign.

Areola atoned for his error with a fine full-length stop to deny Fernandes, Anthony Martial went close with a header and captain Harry Maguire was also off target with a similar effort. 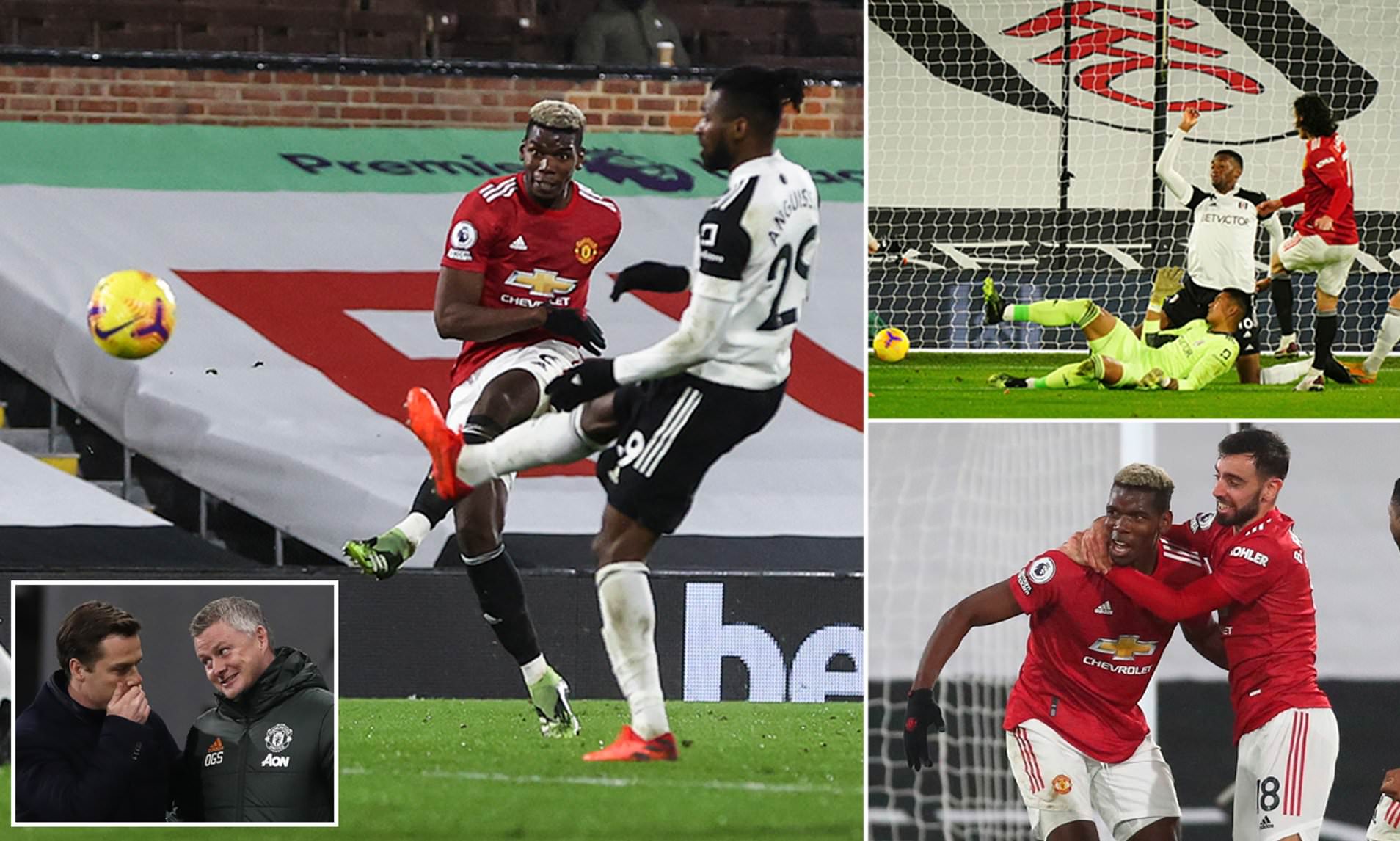 The Reds were dominant now and saw two more chances go our way before the half-time interval. Fernandes fired over from a free-kick and Martial saw another header go wide after Luke Shaw had picked him out.
Ivan Cavaleiro kept United's defence on their toes at the other end with a shot from distance and the returning Greenwood was crowded out on the counter attack in the last action of the first half.

Fulham went close twice in quick succession early on after the resumption as Harrison Reed flashed a shot over the bar and De Gea saved well from the lively Lookman.
The Reds remained a threat in an increasingly end-to-end contest, though, when Maguire headed wide and then the in-form Luke Shaw almost capped another impressive performance with a goal when his deflected drive flashed narrowly wide.
Fernandes headed straight at Areola, only to be flagged offside, and Martial should have done better with another close-range effort kept out by the keeper.
What one Frenchman failed to do from close range, another did so spectacularly from distance.

On 65 minutes and the Reds in need of a winner, up stepped Pogba. He has been nothing short of world class since the contract furore in December and showed his considerable powers here. Pogba seized on a loose, wind-assisted clearance and pulled the ball down with a delicious touch on the edge of the box. He skipped away from his marker, cut inside and unleashed 25-yard rocket that flashed beyond Areola and left his compatriot grasping at thin air. It was a goal worthy of winning any game and will be a contender for any Goal of the Month competition.

Cavani then almost put the result beyond doubt, only to see his header tipped away superbly by a sprawling Areola, who had redeemed himself spectacularly after his earlier error for the Uruguayan's leveller.

That paved the way for a nail-biting finish as the Reds found themselves a side under siege in the wake of a late Fulham onslaught.
De Gea denied Loftus - Cheek with his foot, and the Chelsea loanee went close again on 82 minutes when he fired over the bar after a knock-down from the recently arrived substitute Aleksandr Mitrovic.
Lookman's shot was deflected behind by Wan - Bissaka and hearts were in mouths when Bailly diverted Mitrovic's goalbound effort wide, the ball missing the target by mere inches.
De Gea pushed away a Lookman effort but the Reds survived to return to the summit of the table on a night that marked the halfway point of the season. Phew!