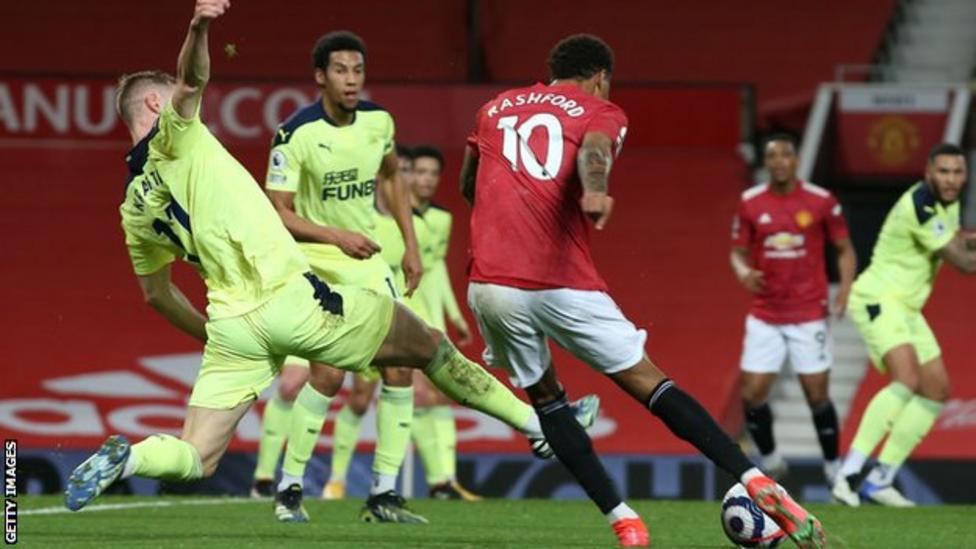 Ole Gunnar Solskjaer's side had been bumped down to third after Leicester's win over Aston Villa earlier in the day, and with surprise package West Ham - under David Moyes - breathing down our necks. A win was imperative against a Magpies side fighting for their league lives, but the Reds started slowly and looked in danger of dropping further points after Allan Saint - Maximin cancelled out Marcus Rashford's opener.

But after impressing during the midweek thumping of Sociedad, James followed up that performance with another excellent showing as he thumped home on 54 minutes for his third goal in as many appearances. Fernandes made it 3-1 from the spot after Rashford had been scythed down to push United back into second and a return to winning ways in the league after two draws despite a slow start.

Solskjaer made five changes from the European win in Italy on Thursday as David de Gea, Luke Shaw, Victor Lindelof, Luke Shaw and Anthony Martial came back in.
Despite their lowly position - fourth-from-bottom and only three points ahead of rejuvenated Fulham in the battle for survival - Newcastle went about their task with the vim and vigour of a side in the upper echelons of the table. It was a start as bright as their voluminous yellow kit, with Solskjaer's team perhaps unprepared for such a quick out of the blocks approach from former United defender Steve Bruce's side.

De Gea punched away an early cross-shot from Joelinton and Jonjo Shelvey, having seized on the loose ball, flashed a drive narrowly over the crossbar from distance.
A James daisy cutter proved easy pickings for Karl Darlow, but Newcastle continued to bely their lowly league position with a bold performance, as the eye-catching Miguel Almiron went close when he fired straight at De Gea with a 25-yarder.

The Reds were mainly reduced to chancing their arm from distance, as Aaron Wan - Bissaka showed, but then came a United lead out of nothing on the half hour mark. It was a goal of superb individual brilliance, as Lindelof picked out Rashford to run at the back-pedalling defence. Rashford flummoxed right-back Isaac Krafth with a nutmeg before he cut inside and smashed a shot beyond Darlow and into the corner, although the visitors keeper will feel he should have done better with the near post effort.

Our no.10 had done the business at one end, but then Newcastle's came to the fore. Having been denied superbly by De Gea, Saint - Maximin finally got the better of the United stopper on 36 minutes. The Reds have been repeatedly undone from set-pieces and our Achilles heel reared its ugly head again as Harry Maguire only half-cleared a Willock corner to Saint - Maximin and he lashed in the loose ball to level.

Fred went close with another long-range strike before a brief flare-up of tempers saw Fernandes booked for a coming together with Isaac Hayden.
The half-time breather failed to dampen Newcastle's fire and they began the second half as they had the first, pinning United back and carving out openings. De Gea was called into action again to keep out the omnipresent Saint - Maximin with a good low save five minutes after the restart.

The Reds finally hit their stride and re-established their advantage with a brilliantly worked second goal, again slightly out of nothing, on 57 minutes. Matic, in for the injured Scott McTominay, shaped to shoot but instead turned and threaded a through pass to the onrushing James wide on the left. The in-form Welshman took a touch and leathered the ball low beyond Darlow for his fifth of the season and second in as many games.

It had taken over an hour, but the Reds had wrestled firm control of the contest. Darlow tipped wide to deny Anthony Martial a match-sealing third before the enigmatic Frenchman was replaced by in-form Mason Greenwood on 69 minutes.

Six minutes further on and Solskjaer's United put the result beyond any lingering doubt. Matic was again involved as he picked out Rashford, only for the striker to be scythed down by the lunging Willock. Willock didn't need to make the challenge but, once he had, there was no doubt over the award of the spot-kick. Fernandes stepped up to dispatch the resultant penalty in his usual fashion for his 22nd goal of the season and give United breathing space.

There were a flurry of late chances to add further late gloss to the scoreline. Matic headed over and Darlow twice saved from a pair of Maguire headers before Fred had another effort deflected wide in our best spell of the encounter.

With United finally having wrapped up the result, there was a late, lovely moment for 17-year-old Academy graduate Shola Shoretire. The highly-rated youngster was given a debut by Solskjaer as he replaced Rashford for the final few minutes, and had a few nice touches in the closing stages. Fellow substitute Juan Mata was also given a run out as the clock ticked down.

Overall team performance: 7/10
United Faithful Man of the Match: Luke Shaw. The best left-back in the country at present.