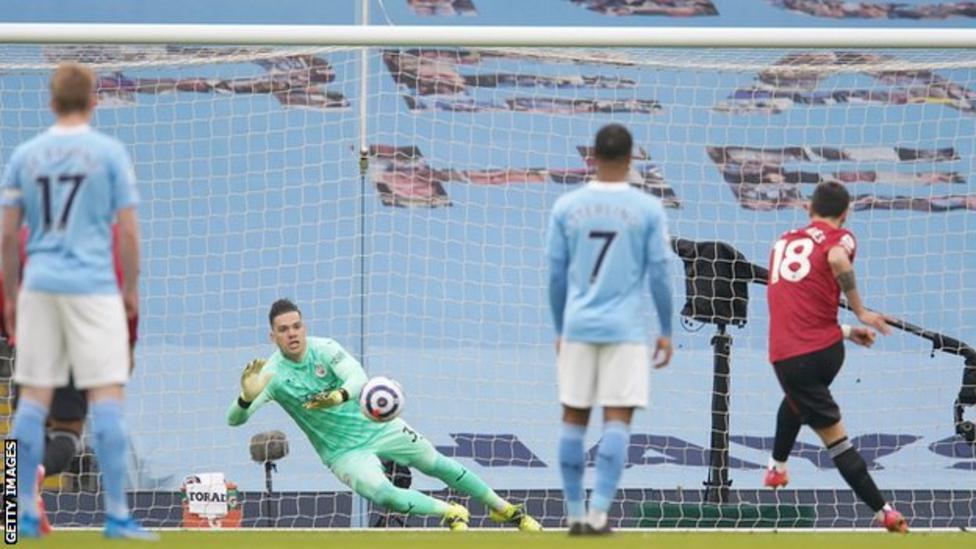 Manchester United defied the odds with a derby victory for the ages as Bruno Fernandes and Luke Shaw scored to end City's 21-match winning run.
Pep Guardiola's all-conquering juggernaut had looked on an unstoppable march to a third Premier League title in four seasons, and whilst this result will do little to derail their charge, it ensured Ole Gunnar Solskjaer's side returned to second spot and arrested a recent dip in form.

With ten games to go, Guardiola's side still lead the way with an eleven-point lead, so even this unexpected setback is unlikely to make any difference when it comes to the title. But the Reds remain on course for a top two finish and now seem almost certain to improve on last season's third place and 6 point tally.

On a grey, damp Sunday afternoon across the city, in the first ever Etihad derby behind closed doors, Solskjaer's side couldn't have wished for a better start. In the 185th all-Manchester meeting, Martial was magnificent throughout and set the tone for a supreme individual performance when he burst clear of the City defence, only to be scythed down by Gabriel Jesus. VAR did not need to intervene as Anthony Taylor's decision was upheld, and Fernandes did the rest from the spot despite Ederson's best efforts to put United ahead after only 101 seconds.

Shaw went close to a second as United turned the tables on their hosts with a magnificent performance of pressing, persistence and relentless pressure. Ilkay Gundogan failed to test Dean Henderson - getting his first taste of a league derby- with a shot from distance in the ninth minute. Marcus Rashford then forced Ederson to scramble across his goal to thwart the winger's effort from distance. Lindelof blocked to deny Jesus before Gundogan again went close as City slipped into their familiar, ominous passing pattern as they started to pin us back.
Yet for all their pressure, they never really got in behind United, with most of their efforts coming from distance, as Riyad Mahrez flashed a shot wide and the in-form Joao Cancelo fired over the top. Henderson was finally called into action as he tipped away a dipping strike from City's other full-back, Oleksandr Zinchenko.

The United keeper had to be on his toes again seven minutes before half-time when he denied Gundogan and then kept out the unusually quiet Kevin de Bruyne from a free-kick.

The Reds needed to get to half-time ahead, and we did so despite late City pressure as Mahrez fired across goal and the onrushing Jesus was unable to turn the ball home on the stretch - although the goal wouldn't have counted anyway as the striker was offside.

City started the second half as they had ended the first and almost equalised inside two minutes when  Rodri  rattled the crossbar with an angled effort after neat build up involving Mahrez and Jesus.
You always felt United would need a second goal to take a giant stride towards a famous win and it duly arrived in the 50th minute.
Henderson began a classic counter-attack as he found Shaw with a long throw-out, and our left-back moved the ball on to Rashford before he advanced upfield. The pair exchanged passes before Rashford teed up Shaw to thump the ball across Ederson and in for his third Reds goal to spark scenes of wild celebration.

James had a shot deflected wide and the excellent Martial went close with a header as United looked more likely to get a third than City pull a goal back.
Raheem Sterling continued his goal drought against us as he fired off target, and a long range De Bruyne effort failed to cause any undue alarm for Henderson.

Jesus flashed a shot across goal on 65 minutes, but it was far from one way traffic as United maintained a constant threat on the counter attack. The Reds could - and probably should - have put the result beyond any lingering doubt on 68 minutes when Martial went one-on-one with Ederson, but City's Brazilian keeper stuck out a foot to save and keep his side in the tie.

City grew increasingly desperate as their usually deadly precision subsided to a much more frantic approach. Substitute Phil Foden was inches off target on the turn, and Sterling then failed to convert at the back post on 78 minutes after De Bruyne had picked him out. Henderson claimed a corner under pressure from John Stones but, for all City's possession and territory, their expected late surge never came.

Referee Anthony Taylor's final whistle after five agonising added minutes signalled a victory that will live long in the memory as we ended City's three-month winning run, stayed unbeaten away from home and secured a third consecutive victory at the Etihad.