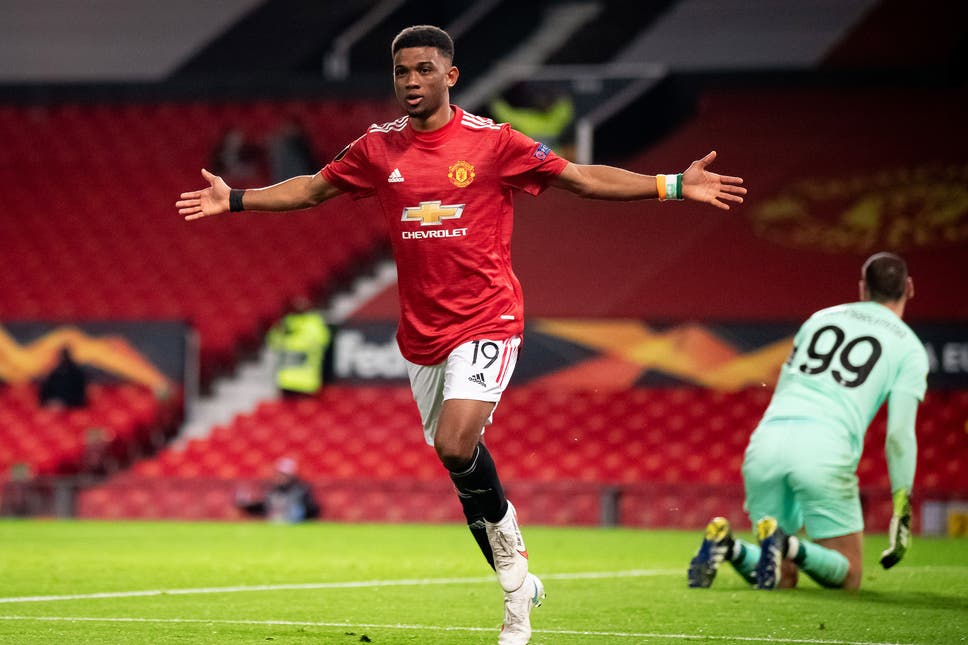 Simon Kjaer cancelled out Amad Diallo's inventive header to grab a crucial away goal and hand the Rossoneri the advantage in the last 16 Europa League tie.
United must score at the San Siro to avoid elimination after Kjaer powered home a header from a corner in the final seconds, the very least Stefano Pioli's eye-catching Milan side deserved from an energetic and eye-catching display.

United keeper Dean Henderson should have done better but failed to keep out the Danish international's effort, giving the Italian side a goal that changes the entire complexion of the tie.
Both sides were missing key men, with ex-Red Zlatan Ibrahimovic sidelined through injury, and Paul Pogba, Marcus Rashford and Edinson Cavani missing for United.
Milan featured Reds loanee Diogo Dalot in their starting XI as rules over eligibility do not apply in this competition - with Eric Bailly, Alex Telles, Nemanja Matic and Mason Greenwood Solskjaer's four changes from the memorable derby win.

Rafael Leao looked to have put the Serie A giants ahead inside five minutes when he fired in an angled effort from close range only to be denied by a clean offside infringement.
Anthony Martial, fresh from his magnificent showing in the Manchester derby, was denied by Gianluigi Donnarumma at the other end in an end-to-end opening between these two great names of European football.

Then came a moment that will be talked about long into the night - yet another VAR incident. The excellent Franck Kessie collected the ball from a throw-in, pulled it down on his chest and fired in a finish on the half-volley beyond Henderson. No one in Red appealed but, surprisingly and somewhat harshly, the goal was ruled out for an accidental handball as Kessie attempted to control the ball.
It did little to stem the flow of Milan attacks and they came close again through ex-City man Brahim Diaz, but Henderson was equal to his shot from distance. The Rossoneri had started well and the performance of Kessie enabled them to control the midfield and dictate the tie.
Henderson was called into action again, this time to keep out Alexis Saelemakers on 30 minutes but despite being second best, United somehow squandered a chance to go ahead shortly afterwards.
Quite how they didn't, only Harry Maguire will know. The United captain met a Bruno Fernandes flick on at the back post, but somehow nudged the ball on to the woodwork with his shin and watched in bemusement as the ball spun away to safety. Maguire had contrived to miss from a yard and, perhaps from then on, you knew it wasn't going to be our night.

Martial had picked up an injury to leave United without a recognised striker for the second half as Amad Diallo came on for the Frenchman, in his first full half of football in Red.
It proved an inspired substitution as the 18-year-old made an instant impact only five minutes after he came on.
As usual, the architect was Fernandes as his expertly flighted ball over the defence picked out the Ivorian, and Amad showed sensational instinct and ability to guide a backwards header to send the ball over Donnarumma and in. The goal brought back memories of a similar effort by Chicharito at Stoke in 2010.

Milan were not rattled by going behind and, in fact, doing so only seemed to inspire them further. Bosnian Rade Krunic nodded wide after Davide Calabria had picked him out, and Henderson then saved from Kessie before Leao's mishit air-kick when well placed provided a let-off. For all Milan's possession and territory, though, United had a glit-edged chance to extend their lead when Amad linked up with Mason Greenwood and the latter cut the ball back for the onrushing Welshman, but he dragged wastefully wide from eight yards.

Solskjaer made three changes soon afterwards as Brandon Williams, Luke Shaw and Fred replaced Aaron Wan - Bissaka, James and Fernandes. It was perhaps a questionable move as United sat on their 1-0 lead for the closing stages, inviting Milan on with the intention of holding what we had.
It seemed a risky approach, particularly against a good side in Europe, and we'd ultimately be made to pay for it as Kjaer thumped home a header from a corner in the 92nd minute to deny United what would've been a scarcely deserved victory.

Overall team performance: 6/10
United Faithful Man of the Match: Amad. What an introduction and what a moment for the Reds youngster