Manchester United have one foot in the Europa League semis with an away win over Granada in the first leg of our quarter-final.
Marcus Rashford fired Ole Gunnar Solskjaer's side ahead when he superbly collected Victor Lindelof's stunning long pass, and fired in a finish beyond Granada keeper Rui Silva.
A late Bruno Fernandes penalty put distance between the sides as United never needed to get out of first gear to see off the cynical and rough house approach of Spain's ninth-best side.

Portuguese referee Artur Dias was at the centre of proceedings, booking five Reds despite the hosts committing more fouls and seemingly kicking United to the ground at every opportunity. Quite how Yangel Herrera, on loan from Manchester City in Granada's midfield, wasn't even booked never mind sent off, will forever remain one of life's great mysteries.
As a result of this official's incompetence, Luke Shaw, Harry Maguire and Scott McTominay will all miss the second leg at Old Trafford having all been carded, therefore ruling the three men out of the return fixture next week.
Solskjaer made three changes from the win over Brighton on Easter Sunday as David de Gea returned in goal, McTominay came in for Fred and Dan James displaced Edinson Cavani with Mason Greenwood leading the line.

Granada had captured the imagination of the continent as a small, provincial club embarking on their first ever European campaign. Whilst Los Nazaries have undoubtedly done well to get this far, United proved too strong and never looked troubled.

Despite the game being played behind closed doors, a streaker disrupted proceedings after six minutes causing a stoppage and a sight no one really wanted to see.
Paul Pogba was the first player to be booked for a foul on Chelsea loanee Kenedy, and Granada earned a corner from the resultant free-kick as Fernandes cleared to safety despite an offside infringement. In a recurring theme, nothing came from the set piece as a low cross was comfortably held by the recalled De Gea. 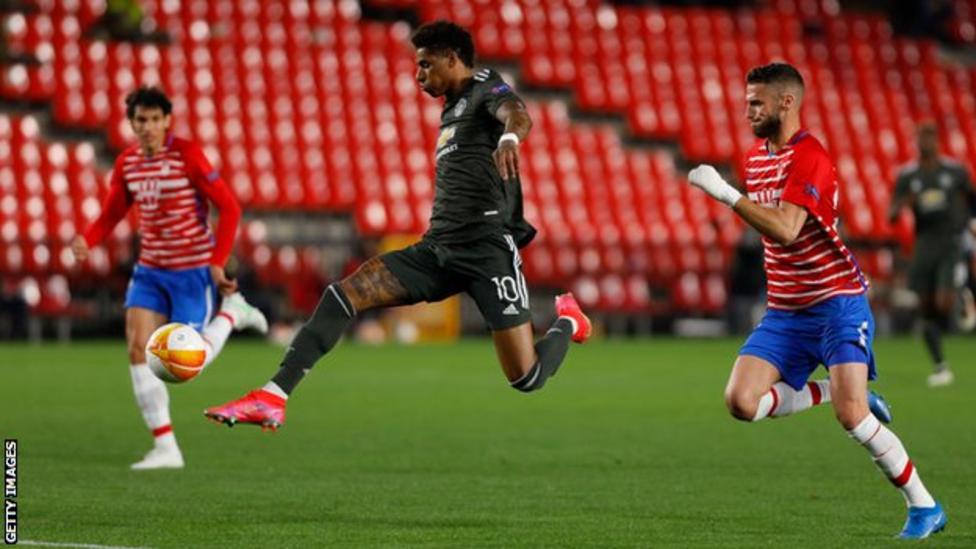 Rashford went close from a set piece of our own at the other end, and our no.10 then had a similar effort from distance, but the ball flashed narrowly wide of the post as United upped the ante in search of the breakthrough.

Herrera, a man who somehow stayed on the field for the full 90, hit the outside of a post before United moved ahead moments later. The television cameras were still showing the replays of Herrera's chance when Rashford put the ball away after a brilliant, defence splitting pass from Lindelof. The Iceman spotted Rashford's run and clipped an exquisite pass over the defence for our no.10 to run onto, take in his stride and slot beyond Silva.

Ex-Spurs man Roberto Soldado fired wide shortly before time, but the 35-year-old striker failed to trouble De Gea with a 20 yarder.The bookings for McTominay and Shaw, making them ineligible for next week's second leg, proved the only blemish on a first half in which the Reds had entirely controlled from the outset.

After Dan James was clattered by Domingues Duarte - an infringement that finally saw a home player booked - United went close to a second from the free-kick. Half-time sub Alex Telles whipped the ball to the back stick and McTominay's snapshot was cleared by a covering defender. Kenedy had earlier sent a volley straight at De Gea and tried his luck again from a similar distance only to see the same result as the returning United stopper was comfortably equal to his strike.

Maguire flashed a shot wide after a driving run from deep, before the impressive Lindelof was called into action at the other end as he blocked from that man Herrera and then Carlos Neva.
The United skipper was harshly cautioned having challenged Soldado for the ball whilst Herrera somehow escaped without censure for a late, dangerous lunge on James that failed to even bring about a booking.

Silva saved well from Fernandes, although the Portuguese was offside anyway, and James went close to a match sealing second when he dragged an effort wide at the culmination of a counter-attack.

United always looked likely winners but made sure of the result in stoppage time when Fernandes was scythed down by substitute Yan Brice and made no mistake from 12 yards. The keeper probably should have done better but the spot-kick squirmed into the corner to give United breathing space.

I was proud of our lads today for keeping their heads in the face of disgusting provocation and a corrupt, donkey, abysmal referee.