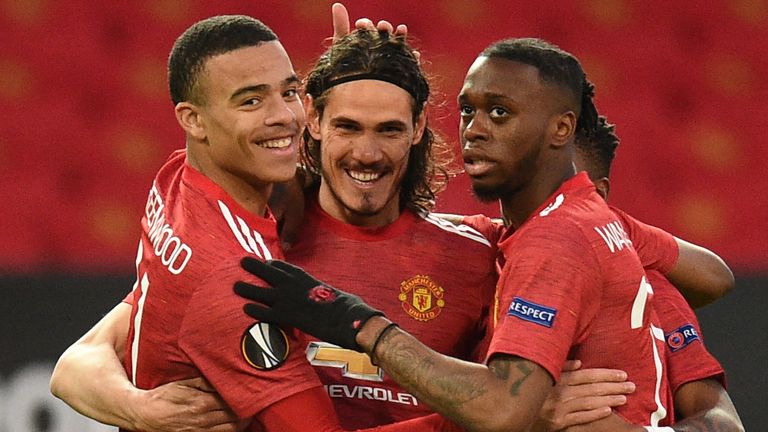 Manchester United finished the job to set up a fifth semi-final under Ole Gunnar Solskjaer against AS Roma in the Europa League.
2-0 ahead from the first leg in Spain, the Reds were already in full control of the tie - a control we would never relinquish - and never needed to get out of first gear against the combative but limited outsiders of a side eighth in La Liga.

Solskjaer's side will now Paulo Fonseca's Giallorossi in the last four as Roma - Chris Smalling, Henrikh Mkhitaryan and Edin Dzeko et al - edged past Ajax (whom we beat when we won this competition in 2017) 3-2 over the two legs. Unai Emery will take on his former side Arsenal with Villarreal in the other last four tie.

The United boss shuffled his pack and made five changes from the first leg in southern Spain, three of which were enforced with captain Harry Maguire, in-form left back Luke Shaw and Scott McTominay  suspended after picking up bookings. Axel Tuanzebe, Alex Telles and Nemanja Matic
returned to the side whilst Fred and Edinson Cavani replaced Dan James and the rested Marcus Rashford in a strong but rotated XI.

It took United only six minutes to go ahead as Telles began the move with a cross. Captain for the night Paul Pogba flicked the ball on with an expertly controlled back header and the ball fell to Cavani who, as expected, fired home with a left-footed volley from close range to put the tie beyond any lingering doubt.
Cavani had been a man on a mission at Spurs and grabbed another here, his second goal in as many games and ninth of the season.

Granada, on their first ever visit to England, showed far more attacking intent at Old Trafford than they did in the first game as City loanee Yangel Herrera - a man fortunate not to have been sent off in Spain - twice headed wide from set pieces to fire warnings to United.

But the Reds were comfortable and should have extended their already handsome aggregate lead further.
Bruno Fernandes flashed a volley over the bar having been teed up by Matic and the Portuguese schemer then fired wastefully off target when he dragged wide at the culmination of a sweeping move.

If that was uncharacteristic from the usually immaculate playmaker, then so too was the errant boot of Mason Greenwood. Fresh from his best form of the season, the dead-eye 19 year old was off target on this occasion as he screwed his shot wide just before half-time as United went in at half time ahead.

Pogba had picked up a booking during the opening 45 and, with Granada's histrionics threatening to get him sent off, Solskjaer withdrew the World Cup winner to prevent him getting another and missing the semi-final. Fernandes took the armband as Donny van de Beek came on to replace the Frenchman.

Granada sub Jorge Molina should have done better and so too should Greenwood when he headed straight at Rui Silva having been picked out superbly by van de Beek.
Cavani added to the increasingly lengthy list of missed chances with a chance that you would expect him to score. The striker's run was timed to perfection to meet Fernandes superb ball in, but the Uruguayan hitman could only connect with his shoulder rather than his head and the gilt-edged opening went begging. 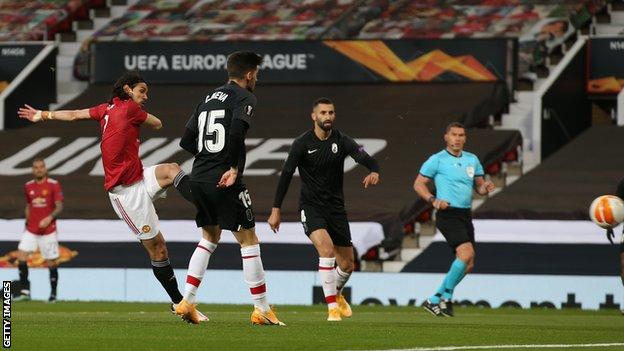 van de Beek flashed a shot inches wide on the hour mark after a solo Greenwood run but Granada continued to press for a much sought after memento goal. Nehuen Perez was denied by David de Gea, and the Spaniard suddenly found himself busy as he was called into action again, this time to deny Herrera.

Uniquely, United had three captains in the match as Fernandes handed the armband over to the oncoming Juan Mata, having himself taken over from Pogba for the second half.
Just as we did in the first game, United grabbed a late second when a Telles cross flicked off Mata to strike the unfortunate Jesus Vallejo and crept in under Silva to rubber-stamp a comfortable 4-0 aggregate victory.

Granada could consider themselves lucky to end the game with a full compliment of players when United substitute Amad Diallo was scythed down by fellow replacement Luis Suarez (no, not that one) having burst clear. In keeping with the abysmal officiating which dogged the tie, Suarez wasn't even booked despite the foul surely appearing to be a case of denying a clear goalscoring opportunity.

For the heavy handed Spaniards, their creditable run to the quarters is over but United roll on to a two-legged semi final against the side from the Eternal City with a European final now within touching distance.